Connecting with others as a Jewish Pavilion volunteer 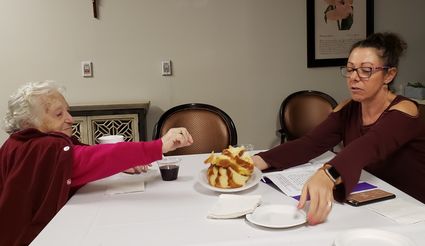 Michelle Bilsky serves her homemade challah to Jenny, a resident of The Commons at the Lutheran Towers downtown.

As I-4 traffic became aggravatingly slow on a recent late Friday afternoon, Michelle Bilsky arrived at Cascade Heights Senior Living in Longwood a little breathless from her rush to make it on time from her job downtown at the Lutheran Towers senior complex to the 4 p.m. Jewish Pavilion Shabbat service. She and her husband, Wayne, who live nearby, leave their jobs early one Friday a month and meet at Cascade Heights to lead the service, which is offered weekly with different leaders.

"Good Shabbos, everyone! Nice to see you all again," she said as she began the service with "Shalom Aleichem," the traditional song to welcome the ministering angels of Shabbat before the formal Friday night prayers. The residents in attendance, some with family members in tow, joined in with gusto.

Bilsky has been leading at Cascade Heights (formerly Brookdale Island Lake and also Chambrel) for about 4 years, at first intermittently, then monthly for the last 2 years, with Wayne joining her for at least the last year. But her association with the Jewish Pavilion began long ago and has evolved in many ways.

A native New Yorker, Bilsky moved to Orlando in 1987 as a transfer student at the University of Central Florida. She moved to South Florida for a job in 2000 but returned and settled in the Markham Woods area of Longwood in 2005, with her oldest daughter about to become a bat mitzvah. They joined Temple Israel, which was then located near their home, and their search for a mitzvah project led them to connect with the Jewish Pavilion. Bilsky began driving her daughter around to deliver challah for the Pavilion and continued with her second daughter's mitzvah project.

Bilsky's search for a part-time job while the family was getting settled also connected her with the Jewish Pavilion, as she worked for a short time in the office as a bookkeeper and clerical staff member in the early days when the organization was led by Arlene Van de Rijn and housed in the Altamonte Springs offices of co-founder Julian Meitin.

As the Cascade Heights service continued, Bilsky invited a resident to lead an English prayer for the congregation and another to lead a prayer for Israel. One resident read a poetic homily, "I Will Never Be Lost," by Abraham Joshua Heschel. After weekly Jewish Pavilion volunteer Shirley Schoenberger led her customary "Bim Bom" to close the service, Bilsky walked among the tables and chatted with everyone as baked goods were passed around.

"They really are like family," Bilsky said of her friends at Cascade Heights. "My grandmother passed away, and my aunt, over the last couple of years, and the residents are just so wonderful. They're so supportive." For her, the monthly Shabbat programs are a fulfilling way to unwind after a sometimes stressful week. "Just everything goes away," she explained. "I get as much, if not more, out of it than they do."

She and her husband sometimes bring their grandson, Caleb, with them, beginning when he was just a baby. The residents have seen him grow into a toddler of 4 and will continue to see him as he grows up. Their four children, ages 20 to 26, have been joining in to help at holiday and other programs for years as well.

Recently, Bilsky began leading the monthly Shabbat programs at Lutheran Towers, where she has worked as director of human resources since February 2018. At that time, Jewish Pavilion program director Walter Goldstein led them. "I would go and listen to Walter sing. He's wonderful and so uplifting," said Bilsky. "When he got sick [late last summer], I just kind of slipped in there and said, 'OK, let's just keep going.'"

A handful of Jewish residents gathered there for a Shabbat lunch of pastrami and latkes on a recent Friday, with Bilsky bringing freshly baked challah from her home, a feathery-light recipe learned from her grandmother that she makes each week and that the residents very much look forward to. Sandy, who lives in the independent living building with her husband, Dick, appreciates the opportunity to share a Shabbat meal with other Jews. "It's so nice because I don't have family here," she said.

As at the Cascades Heights program, Bilsky began the short service with "Shalom Aleichem," singing with her eyes locked with those of a nursing home resident named Jenny. Bilsky has strongly bonded with the 103-year-old Jenny, who grins broadly and nods her head in time as she joins in the ancient song, her eyes alight. Jenny has not been well recently and her hearing has been affected. "When she can hear and she's comfortable, she tells us stories about how she grew up," said Bilsky. They share a connection of heritage, as Bilsky's paternal great-grandparents emigrated to the U.S. from Romania at around the same time as Jenny did.

It's such connections that Bilsky has made through the Jewish Pavilion that have meant the most to her. "It's just the people that you meet," she said. "That's really been a blessing for me."