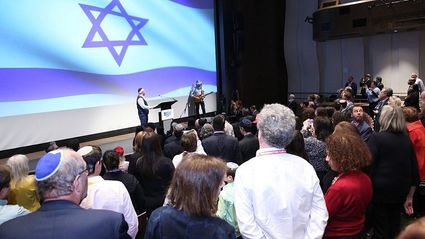 Hundreds of supporters of communities in Judea and Samaria gathered at the Museum of the Bible in Washington, D.C., to show their support.

(JNS)-While the AIPAC policy conferences features panels and breakout sessions on almost every issue central to the geostrategic challenges facing the State of Israel, one key issue is repeatedly left off the schedule. That is the issue of Jewish settlements and growing neighborhoods outside the Green Line.

To that end, more than 700 conference participants gathered off-campus on Sunday night to participate in an event supporting approximately 700,000 living in Judea, Samaria and periphery neighborhoods in Jerusalem. The event was hosted by the Yesha Council, the regional council of Judea and Samaria.

Following a successful inaugural event at an outside venue last year, which included speeches by several Israeli ministers and U.S. congressmen, this year representatives of Judea and Samaria hosted a first-class reception at the nearby Museum of the Bible.

Former Minister Gideon Saar, who currently holds the fifth spot on the Likud Party's Knesset list and who will be all but certain to become a minister again should Likud form the government following the April 9 elections in Israel, told the crowd that "the reason we came this evening is to promote a clear message strengthening Jewish presence and Jewish communities in Judea and Samaria."

"It is not temporary," he said, referring to settlements and neighborhoods in those areas. "It will always be part of the State of Israel. We will never agree to establish a new Arab state in the heart of our land. The presence of Jews in Judea and Samaria is strengthening the security of Israel."

Yesha Council chief foreign envoy Oded Revivi, who is also mayor of Efrat, one of Israel's largest and most affluent communities in Judea, said "we must emphasize that the settlements are not an obstacle to peace, but the promoters of peace."

Revivi highlighted a number of examples of economic cooperation and shared infrastructure that he suggests many who form opinions on Israel don't know about. On delegations that he has led, the mayor said "people were surprised to learn of shopping centers where Arabs and Jews shop together, roads where Jews and Palestinians drive together, industrial zones where both work together."

"It is our mission to show a reality where Jews and Arabs can live together in peace and understanding," he said. "When that knowledge will be spread, then our people can live and be secure."

Col. Richard Kemp, a retired British officer who is former commander of British forces in Afghanistan, went on to explain the importance of maintaining the strategic high ground in Judea and Samaria.

All of the speakers lauded the Trump administration's recognition of the Golan Heights, and along those lines mentioned hopefully that such a status would one day be extended to Judea and Samaria.

"Before the Syrian civil war, the Israeli establishment detected promising signs of softening with [Syrian] President Bashar Assad," noted Kemp. "And they were investigating the return of the Golan Heights to Syria. Can you imagine what would have happened just a few years later if Israel would have given over the strategic high ground?

Kemp said Israeli territorial withdrawals have not led to peace, but rather to further aggression against the Jewish state. "It is not even a question of whether the Palestinians say that they could have peace with Israel. Once they would take control of [strategic] territory, what is to stop any jihadist entity from controlling that?

Discussing the taboo given to Jewish settlement in communities central to Israel's historical narrative, event host and community spokesperson for the Jewish community of Hebron, Yishai Fleisher, said "if you listen to the media, we are not the startup nation, we are the occupation nation. It is a pernicious narrative."

He stressed that the most important war Israel is fighting today is "the narrative war," which he says focuses on battling the worst form of delegitimization, whereby Israelis are considered "thieves" in their own homeland.

Fleisher said it's time that "we retell our narrative," pointing to education and outsiders visiting the areas in question to see them firsthand. He also another crucial way "is to be strong, and to settle and live in our land."

Fleisher and co-host Eve Harow noted the importance of discussing the future of the settlements, which they acknowledge is a controversial topic in the United States.  Both expressed their hope that AIPAC would bring such an event out of the sidelines and into the conference itself next year.