Many ways to celebrate a Jewish Pavilion-style Passover 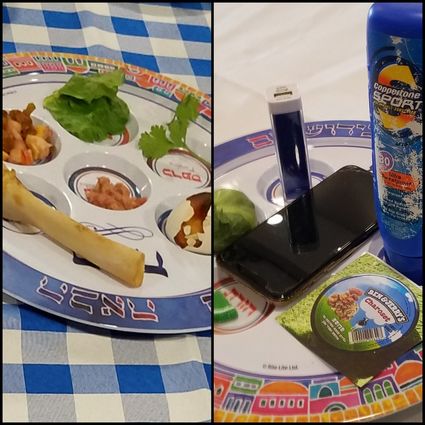 Two types of seder plates at a Jewish Pavilion seder.

Last month, The Jewish Pavilion celebrated Passover with residents in elder communities through a variety of both traditional and modern approaches to the seder. The majority were presented with the Jewish Pavilion's own abridged version of the traditional Haggadah. Traditional Passover melodies were sung at many of these seders which often had the bonus of some classic seder dishes such as chopped liver, matzo ball soup, and gefilte fish with horseradish.

Yet, some of the more contemporary-style seders incorporated Passover song parodies like "Take me out to the Seder (Ball Game)" and "There's No Seder (Business) Like Our Seder (Show Business)." One seder even consisted of a creative seder plate such as the one illustrated which had a companion Haggadah all designed by teens from Southwest Orlando Jewish Congregation. The teen-invented seder plate included items such as a cell phone, sunscreen, and the top to Ben and Jerry's charoset-flavored ice cream (available in Israel).