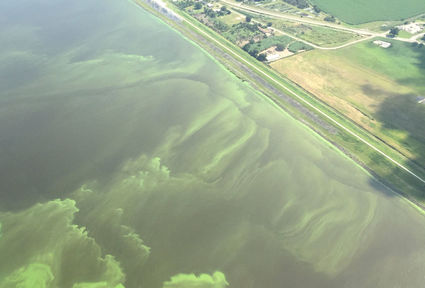 Cyanobacterial blooms, such as the one shown that occurred in 2016 on Lake Okeechobee, Florida, can release toxins.

Last July, then-governor Rick Scott declared a state of emergency in seven South Florida counties because of the algae bloom all across Florida's west coast. The pea-green, thick film covering the freshwater lakes, salt-water canals and waterways not only looked bad, but smelled awful. "It is like moldy bread," said one Lake Okeechobee resident.

Not only did it look and smell bad, it could be toxic if consumed, and fatal for dogs that swim in or drink the scum, according to Richard P. Stumpf, an oceanographer with the National Oceanic and Atmospheric Administration.

Stumpf explained the algae bloom is a mixture of rain, hot weather and a heavy concentration of phosphorus and nitrogen from fertilizer.

Algae bloom is not only a Florida problem. It is a worldwide problem. Treatment options, including pouring harmful chemicals into the water or simply scooping off the scum have been costly and thus far, not very successful.

There is, however, one Israeli technology start-up that may bring the cure to this problem.

BlueGreen Water Technologies Ltd., under the direction of Israeli microbiologist Dr. Moshe Harel, who earned a Ph.D. from the Hebrew University of Jerusalem, believes he has the solution to this devastating problem. He developed a treatment called Lake Guard™ that is U.S. EPA approved and cleans water to the NSF60 standard for drinking water.

"We are very proud to be in a position where we can make a difference in one of the world's most pressing humanitarian and environmental problems," Harel told Heritage via email.

Lake Guard™ floats on water and kills the cyanobacteria, purifying the body of water for use within a few days, and at a fraction of the current operational cost irrespective of the size of the waterbody.

BlueGreen Water's products are now available in the United States, in addition to China, Russia, South Africa and other countries.

Harel and other BlueGreen Water Technologies will be meeting with Gov. Ron DeSantis on May 29 in Israel and discuss with him Florida's algal problems and how to address them. Prior to their meeting with the governor, on Friday, May 24, they are meeting Florida's Commissioner for Agriculture, Nikki Fried.

"This meeting will be held in the field in order to provide the commissioner with a first-hand demonstration of the ease and efficiency with which BlueGreen's products can be applied, allowing its end-users to eradicate algal infestations within 24 hours, save money and rebalance the ecological conditions in the water to the extent that they can enjoy a bloom-free lake," Harel stated.