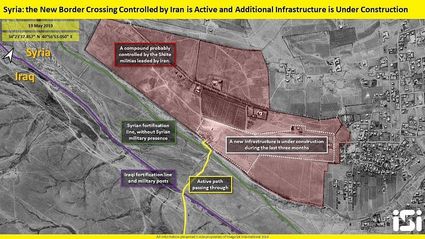 A view of Iranian construction along the Syrian-Iraqi border that would allow Iran to transfer weapons, armed personnel and oil into Syria.

The images show Iranian construction work on a new crossing on the Syrian-Iraqi border, which, according to ISI, would allow Iran to transfer weapons, armed personnel and oil into Syria.

The images are from an area that has been in the headlines in the past. An older border crossing in the same area, known as Albukamal, was destroyed in airstrikes attributed to Israel by international media reports a little more than a year ago.

The 2018 strikes were unusual not only because they demolished an Iranian-run border crossing, but also because they destroyed a building that served as a headquarters for Iranian-backed Shi'ite Iraqi militias-just the kind of forces that Iran wants to inject into Syria, along with weapons and oil to bypass U.S. sanctions.

According to reports from last year, dozens of Iraqi militia operatives, most of whom were members of an organization called "Hezbollah Battalions," were killed in the attack.

Now, it seems, Iran's Islamic Republican Guards Corps (IRGC) is trying again. It is building a new land corridor in the very same area. The satellite imagery can be interpreted as an Israeli warning to Iran to cease its activities or face additional strikes.

This state of affairs reflects the fact that Iran remains committed to its long-term objective of turning Syria into an Iranian military zone and a future base of attack against Israel.

A Fox News report from last week quoting "Western sources" said that "Iran increased its presence in the area last summer, adding that after the 2018 airstrikes on the old Albukamal crossing, the Iranians have put a lot of effort and resources into building the new one."

Iran has been involved in a stubborn and patient effort to turn Syria into a base of operations. But it has run into a brick wall, in the form of an even more determined Israeli effort to disrupt this threatening process.

Hundreds of Israeli airstrikes in the past few years alone have put a major dent in Iran's plans, destroying missile bases, weapons production sites, military bases and weapons' transfer stations. This mission, of preventing Iran from taking over Syria, has become a top objective in the Israeli Air Force. The campaign, known as the "War Between Wars," is continuous, and requires 24-7 intelligence-gathering, precision strikes and calculated risks.

But the latest satellite imagery suggests that Iran's leadership is far from giving up. Iran has two central objectives in Syria: The first is to turn the country into an Iranian-controlled war machine against Israel and the second is to use it as a weapons trafficking zone for supplying Hezbollah in neighboring Lebanon.

Despite being under major American economic pressure and facing bruising Israeli strikes on its assets in Syria, the Iranians are not walking away. They are merely tweaking the "volume" of their activities, turning the dial up and down in line with conditions, but never switching their Syria project off.

Supreme Leader Ali Khamenei and the IRGC remain committed to building capabilities in Syria, so that they can fire missiles and rockets at Israel, create terrorist cells and send armed formations to the Syrian-Israeli border. Tehran wants to create a "second Lebanon" on Syrian territory.

In order to achieve that aim, its leaders cannot rely on cargo flights to deliver weapons and fighters alone. Those flights are under close Israeli surveillance. Repeated strikes on Iran's weapons depots at Damascus International Airport are proof of that. Iran, in response, reportedly moved its air-smuggling operations earlier this year to the T-4 Syrian air-force base in the central Syrian desert. But that base is also vulnerable to reported Israeli strikes, as an attack on it in July 2018 has demonstrated.

A land corridor would enable Iran to keep building its bases in Syria, to nourish Hezbollah, and to expand its destabilizing influence.

The question then arises as to why Israel appears to have chosen to warn Iran to stop building the crossing via media reports that show that Israeli intelligence is on to Iran's activities, rather than directly striking it.

One reason seems to center on the effectiveness of "information campaigns" in the use of intelligence to disrupt enemy activity via media warnings, as a complimentary tactic alongside kinetic airstrikes.

This provides Israel with some flexibility, allowing it to try and diffuse a threatening situation without the associated risk of fire strikes, which can snowball into larger conflicts.

Israel may have opted for this tactic due to the rising American-Iranian tensions in the Persian Gulf. Israel may wish to lower its profile during this time to see how the tensions play out and to avoid taking action that can further inflame the region.

As the White House mobilizes additional troops to the region, as well as naval ships and missile defenses, Israel appears to be turning down the volume on its own preemptive strikes in Syria. But only up to a point.

This month alone, media reports claimed that Israel conducted a missile strike on a target south of Damascus. In April, Israel reportedly struck a major Iranian weapons' facility in the northwestern Syrian city of Masyaf.

Such strikes presumably occur in response to urgent and critical intelligence of threatening Iranian activities, which, if left, unchecked, will expose Israel to the risk of guided missile attacks from Syria.

Another risk stems from Syrian President Bashar Assad's repeated and reckless attempt to attack Israeli Air Force aircraft from surface firing stations. The latest example of this occurred on Monday, when a Syrian anti-aircraft system fired on IAF jets that were on a routine flight in northern Israeli airspace. The IDF in response struck the launcher, reportedly killing one Syrian soldier and injuring another.

The Assad regime's policy of firing on Israeli jets risks dragging it into any future Israeli-Iranian escalation.