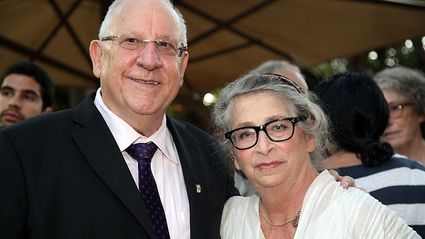 Israel's President Reuven Rivlin with his wife, Nechama Rivlin, during the French Ambassador's ceremony awarding the Legion Honor, at the ambassador's home in Jaffa, on June 18, 2014.

(Israel Hayom via JNS)-Nechama Rivlin, the wife of President Reuven Rivlin, passed away at Rabin Medical Center in Petach Tikvah on Tuesday, June 4, 2019, a day before her 74th birthday.

Israel's first lady had suffered from pulmonary fibrosis, a condition in which scar tissue accumulates in the lungs and makes it difficult to breathe, and had undergone a lung transplant in March.

In recent years, Rivlin had been seen in public with a portable oxygen tank, including when accompanying her husband at official ceremonies.

Born in an Israeli farming community, she married the future president in 1971 and was a trusted adviser throughout his political career.

She is survived by her husband, three children and seven grandchildren.

In a statement, the president thanked the hospital's staff for the "dedicated, sensitive and professional treatment she received over the last few months, nights and days, with a broad and welcoming heart."

"Together with all the citizens of Israel, my wife Sara and I express deep sorrow for the passing of the wife of the president, Nechama Rivlin," the prime minister said.

Blue and White Party co-chairman Benny Gantz said the party is "bowing its head" in her memory. "Nechama was a wonderful woman, she faced difficulties with a smile and a model for all of Israel," he said.

"We are truly saddened by the loss of Nechama Rivlin... who was like a mother to us all," the IDF Spokesperson's Unit said via the army's official Twitter account.

Knesset Speaker Yuli Edelstein offered his condolences to Rivlin on behalf of the parliament. "She was a special person; her bright and shining countenance touched everyone she encountered. She will be greatly missed," he said in a statement.

Israel's Ashkenazi Chief Rabbi David Lau called Rivlin a "woman of valor," who for many years "stood by her husband as he served the public with endless devotion and humility."

Jewish Agency Chairman Issac Herzog also expressed his condolences, saying, "The Jewish Agency and Jews worldwide mourn First Lady Nechama Rivlin, who passed away today. She was involved in many social charities with love and modesty, opening the doors for Israelis and for the Jewish people. We embrace President Rivlin and family and share their grief."

Nechama Rivlin was laid to rest on Wednesday at Mount Herzl, where a funeral will take place at the Gedolei HaUma ("Leaders of the Nation") section, and eulogies will be delivered.