How a long-lost Caribbean text started a US Kabbalah revival 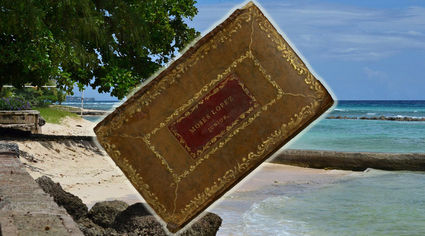 PORTLAND, Ore. (JTA)-From the day after Passover through Shavuot, Jews count down the days to commemorate the barley sacrifice, or Omer, given at the Temple in honor of the Israelites' journey from Egypt to Mount Sinai.

Although you could fulfill the mitzvah of "counting the Omer" merely by reciting the blessing and stating the day's count, many Jews use the Omer period to renew their souls. People enslaved to anxiety or material possessions use the ritual to seek transformation into individuals living a purposeful and meaningful life.

Historians have long believed that American Jews first started using the 49-day count as a form of self-help sometime between 1880 and 1920, when masters of the Jewish mystical tradition, or Kabbalah, arrived in New York from Eastern Europe.

But a recently rediscovered text the size of a smartphone shows that in truth, Americans began their Kabbalistic counting over 100 years earlier.

In 1821, Matthias Lopez, a prompter for a Philadelphia theater company, donated a small Hebrew manuscript from Barbados, "Sefer Shel Sefirot HaOmer" (1775), to the Library Company of Philadelphia.

Before "Sefer Shel Sefirot HaOmer" ("The Book of the Counting of the Omer") was written, early American prayer books contained the basic count. In contrast, the Barbados Omer book leads readers through a series of daily mystical meditations focusing on Psalm 121, "I shall raise my eyes to the mountains"; "Ana Bekoach," an incantation attributed to a rabbinic sage of the first and second centuries CE; and the names of God. These meditations were believed to have healing and protective powers.

The book fills an important gap in our previous understanding of how Kabbalah was used in early America. Yet historians have largely ignored "Sefer Shel Sefirot HaOmer" for the nearly 200 years that it's been housed in the archives of the Library Company of Philadelphia. The title page and cover are likely to blame, as they bear the name of Matthias's father, Moses Lopez, an obscure Barbadian immigrant who was assumed to be the author.

I, too, would have ignored the miniature volume if I hadn't been obsessively researching Moses for a book I am writing about multiracial Jews during the Age of Emancipation. At the heart of my narrative are siblings Sarah Rodrigues Brandon and Isaac Lopez Brandon, who were born enslaved to Moses' mother. Sarah and Isaac obtained their freedom with the help of their wealthy Sephardic father, converted to Judaism, left Barbados and married well.

But the Brandons could not leave their enslaved pasts completely behind, as Moses and Matthias Lopez immigrated to New York and Philadelphia shortly before the siblings did. The Lopezes served as a reminder of Sarah and Isaac's early life in bondage.

Consequently, when I go to any archive, I always look for evidence from both families. In essence, I have been stalking Moses and Matthias Lopez, eager to see what light they shed about former Barbadian Jewish slaves and slave owners.

Because of my historical sleuthing, I knew how Moses Lopez wrote his numbers. The numerals in the Omer book didn't match his handwriting. I also knew that Moses couldn't even write his name in Hebrew, let alone pen a Hebrew manuscript of this quality. But mere months before the book was written, the extremely learned Sephardic rabbi Raphael Haijm Isaac Karigal, who had authored the first rabbinical sermon printed in the U.S., came to Barbados, where he became a close friend of the Lopez family. The handwriting matches Karigal's surviving letters. The meditations also correspond to those Karigal learned and used in Hebron, where he was raised.

The Barbados Omer book is the earliest known American example of contemplative Kabbalah aimed at laypeople. Karigal died in Barbados two years after writing the book. Moses Lopez lived on, and migrated north when the economy floundered in the Caribbean, bringing the small book with him when he moved to the United States in the 1790s.

The book's journey is telling. Prior to 1820, the Caribbean had the largest and wealthiest Jewish communities in the Americas. In fact, Caribbean Jews played a key role in shaping American Jewish history by sending spiritual leaders, congregants and funds north to U.S. congregations. The Brandons helped fund Philadelphia's second synagogue building, and their cousin's husband became its hazan.

While the Barbados Omer book did not lead to a widespread change in ritual practice in early America, it has strong parallels with later Omer revivals and with the influx of Eastern Sephardic Kabbalism during the 20th century. As the 1820s bloomed, Caribbean communities ceded their central role to Jewish communities in northern cities.

Tracing the travels of early Caribbean immigrants to the United States reveals where these West Indian Jews went, what they took with them and how they changed American Jewish life.

This is pretty interesting. There was another early 19th c. Jewish self-help movement that started in Eastern Europe called Mussar. How would that have been connected to practices like this?