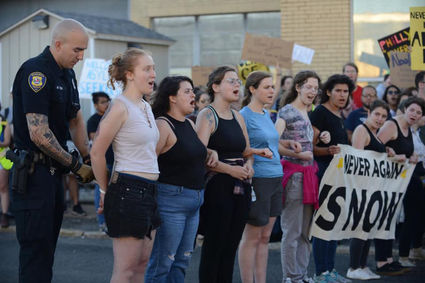 Members of the group Never Again Action have been arrested in protests against immigrant detention policies.

BOSTON (JTA)-A group of some 1,000 Jewish activists and others brought rush hour traffic to a halt in downtown Boston to protest immigrant detention in the city and across the country.

Tuesday's protest followed a similar event Sunday where 36 Jewish activists were arrested during a protest at a New Jersey detention center.

Following a rally at the New England Holocaust Memorial, protesters marched through the city's streets to the Suffolk House of Correction, where 18 people were arrested after locking arms at the facility being used by U.S. Immigration and Customs Enforcement to house scores of immigrants awaiting deportation proceedings, the Boston Globe reported.

The demonstration was organized by Never Again Action, the new Jewish group of young activists who also organized the New Jersey protest, which is invoking the memory of the Holocaust to refer to ICE's treatment of undocumented immigrants at the U.S. southern border and other locations. Some carried signs reading "Never again means close the camps."

The protest was supported by the Boston chapter of IfNotNow, a Jewish group that opposes Israel's occupation of the West Bank, and Movimiento Cosecha, a national immigrants rights group.

"When we grew up hearing the words 'never again,' it's referring to a moment like this," Michaela Caplan, 23, one of the organizers of the event, told the Globe. Caplan said her grandmother was a survivor of Auschwitz and that 30 family members were killed by the Nazis.

"I think it's particularly important for Jews, who face anti-Semitism and have an ancestral history of trauma, to speak out on behalf of other people," Rabbi Becky Silverstein of the Beyn Kodesh l'Chol community said.

While there are differences of opinion within the Jewish community about invoking comparisons with the Holocaust, there is widespread support for asylum seekers, Jeremy Burton, executive director of the Jewish Community Relations Council of Greater Boston, told the Globe.

The lesson from the Holocaust, Burton told the Globe, is a "deep moral imperative to protest against human rights violations being done in our name because when we fail to protest, those who are acting in such a way will see that as permission to do worse."