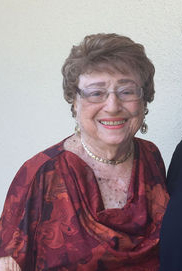 Phyllis Schulman Kamenoff, age 94, of Altamonte Springs, passed away on Sunday, July 7, 2019, at AdventHealth Hospice at Island lake. She was born on Oct. 28, 1924, in Springfield, Mass., one of two daughters born to the late Harry and Lillian Pallot Schulman. Her family moved to Miami when she was four.

Phyllis grew up in Miami where she excelled in music. She was very active in many groups, including the YMHA where she was part of USY and B'nai B'rith Girls. She was a summer camp counselor and she and her sister wrote the official camp song that was sung for many years by the campers. Phyllis loved her days spent at Miami Senior High School, participating in many clubs and activities. At graduation, Phyllis was one of three students chosen to speak at their commencement.

Phyllis attended the University of Miami and in 1942, was on the committee that established the first Hillel Chapter there, becoming president two years later. Graduating from the UM School of Music, she sang with the 60-piece symphony orchestra at graduation-even though her first love was popular music. Phyllis was a member of the Jewish War Veteran's Drum and Bugle Corps as a majorette and became the Drum Major. In 1941, the band was invited to march in the inaugural parade in Tallahassee for the new governor, Spessard Holland.

Phyllis came to Orlando in 1944 to be the mistress of ceremonies and sing at the beautiful supper club called the Flamingo Club near the old Orlando airport. After meeting Rabbi Morris Skop from Congregation Ohev Shalom, he asked her to bring her show to the San Juan Hotel to perform at a dance for Jewish War Veterans. She agreed and was chauffeured back and forth by Abe Kamenoff and his brother, Jack (Shug). Abe had just returned from the South Pacific where he served for three years. Orlando's Jewish community consisted of 75 families at that time and most of them came to the San Juan Hotel to meet the Miami singer who was headlining the Flamingo Club.

Abe and Phyllis were married in Miami 2 1/2 months later and Abe brought his new bride back to Orlando. Her sister, Madaleen, married Abe's brother, Shug, seven months later. Phyllis and Abe were happily married for 58 years when he passed away in 2003. Abe attended the University of Florida and together they attended every home game in Gainesville for 40 years.

In 1954, the Kamenoffs joined Temple Israel and Phyllis has served in almost every capacity in Sisterhood and the Temple. For many years, she sangin the choir; served as flower chairman for over 10 years; worked on the Calendar Book and overseeing the High Holiday Flower Fund and Break the Fast. She also co-chaired catering the Shabbat Luncheons. In 1997, she received a Sisterhood Leadership Award given by the Florida Branch of the Women's League for Conservative Judaism. In 2008, she was honored as Temple Israel's Woman of the Year and in 2009, was honored with the Golden Jubilee Award in recognition of her more than 50 years of dedicated service to the Temple and community.

Phyllis's community outreach extended beyond Temple Israel. A cancer survivor since 1985, she worked with the now Orlando Regional Medical Center counseling others undergoing treatment. She also has been a member of the Fortune Hunters-a stock club, since 1971, meeting once a month to share information and trying to stay ahead in the stock market. Phyllis and Abe were among the founders of the Jewish Community Center where she was a member of the 39ers; a lifetime meber of Hadassah; and a member of the Holocaust Center, Kinneret, Jewish Family Services and Jewish Pavilion. She was also a member of the Historical Society of Central Florida. Phyllis served as an interviewer and docent of Mosaic of Florida when it started in Orlando. She also was on the board and an adviser at Park Lake Nursing Home.

Phyllis is the mother of Sharon Stone; Kathy (Ken) Cristol and Michael (Brenda) Kamenoff. She is the grandmother of Samantha (Rob) Furbush, Ashley (Eric) Berman, Melanie Cristol, and Brooke and Corey Kamenoff; and doting great-grandmother of Brandon Furbush Jacob Berman and Carter and Cody Furbush. She cherished the memory of her oldest granddaughter, Jenny Stone Brown.

Phyllis was always proud of the many friendships she made in Orlando-men and women of all ages. She continued to stay active in the community she loved and where she spent most of her adult life. One of her greatest pleasures was her twice a week majhong game with many ladies she played with for over 60 years.

Phyllis loved her life in Orlando and is proof that age did not define her.