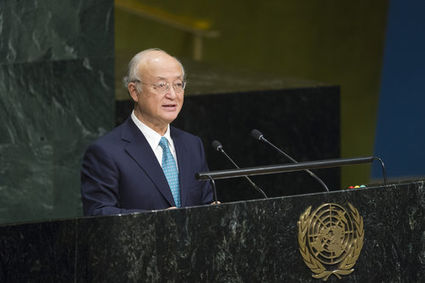 Yukiya Amano, then director general of the International Atomic Energy Agency, the nuclear watchdog of the United Nations, addresses the U.N. General Assembly as it considers a report of the IAEA on Dec. 12, 2016.

(JNS)-The director of the International Atomic Energy Agency, Yukiya Amano, died at the age of 72, announced the agency on Monday, July 22.

Amano led the nuclear watchdog since 2009 and oversaw the 2015 Iran nuclear deal that simultaneously consisted of secret side deals between the IAEA and the Islamic Republic.

Earlier this month, Amano said that Iran had surpassed the uranium-enrichment limit set as part of the nuclear accord.

"While I am convinced that the IAEA as an institution will be able to continue its work dedicated to nuclear non-proliferation, the loss of a personality like Yukiya Amano, who had embodied this dedication, will add to an already highly delicate and complex situation with regards to the nuclear agreement with Iran," Adnan Tabatabai, a scholar at the German-based Center for Applied Research in Partnership, told the Associated Press.