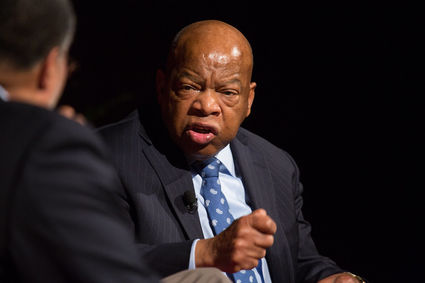 (JNS)-U.S. Rep. John Lewis (D-Ga.), a veteran Democratic lawmaker and icon of the civil-rights movement, is currently co-sponsoring a resolution for and against the anti-Israel BDS movement, leading to questions as to whether or not he supports boycotting the Jewish state.

Last week, Rep. Ilhan Omar's (D-Minn.) introduced a bill affirming the right to boycott countries. It was widely seen as a bid by Omar, who openly supports the BDS movement, to push back against U.S. laws banning the boycott of Israel.

Rep. Lewis's co-sponsorship of the bill is seen by some as lending credibility to the resolution, which will likely face stiff opposition in the Democratic-controlled House of Representatives.

In a statement to JNS, Lewis refuted the notion that Omar's recent bill supports the BDS movement.

"We must be very careful in these times of gross exaggeration and whipped up hostility to verify allegations and accusations that are being reported," he told JNS. "Jewish and African-American communities know all too well how sensationalism and misrepresentation of the facts can be used by the worst forces in our world community to tear down democracy in favor of the knee-jerk reaction."

"We must also reject politics that demonize personalities and continue to defend the ideals of true democracy when it is most urgent," he continued. "It is very important that we all remain vigilant and protect ourselves from these negative influences that seem to be dangerously multiplying in our society at this time."

'The right to protest'

Although the pro-boycott resolution introduced by Omar does not explicitly mention Israel, the freshman congresswoman told Al-Monitor last week shortly before filing it, "We are introducing a resolution... to really speak about the American values that support and believe in our ability to exercise our first amendment rights in regard to boycotting. And it is an opportunity for us to explain why it is we support a nonviolent movement, which is the BDS movement."

However, Lewis contested this, saying, "I guarantee that if members of the community actually read the text of H. Res. 496, a Judiciary Committee resolution introduced by Rep. Omar, they will discover it makes no mention of Israel. The resolution merely advocates for the right to protest as a central principle of democratic freedom."

"Freedom of protest has been important to the advancement of both the African-American and Jewish American community, and there are efforts to stamp it out as a tool of activism in our society," he added.

The resolution also compares BDS to boycotts of Nazi Germany and the Soviet Union.

It states, "Whereas Americans of conscience have a proud history of participating in boycotts to advocate for human rights abroad, including... boycotting Nazi Germany from March 1933 to October 1941 in response to the dehumanization of the Jewish people in the lead-up to the Holocaust... the United States Olympic Committee boycotting the 1980 summer Olympics in Moscow in protest of the Soviet invasion of Afghanistan in the preceding year; and "leading the campaign in the 1980s to boycott South African goods in opposition to apartheid in that country."

"Earlier this year, I cosponsored H. Res 246, a bipartisan foreign affairs resolution that condemns the BDS campaign and efforts opposing Israel's right to exist and the importance of two-state solution," Lewis told JNS. "I will support H. Res. 246 when it comes to the House Floor tomorrow. This resolution has been carefully crafted not to suppress American commitment to free speech."

"I want to remind you that I am a co-chair of the newly reorganized Black-Jewish Coalition Congressional Caucus and a key member of the Anti-Semitism Task Force," he added. "My commitment to these imperatives is not and has not ever wavered."

Like Lewis, J Street supports both resolutions despite claiming to oppose BDS.