From the Editor's desk: BDS: 'Don't buy from Jews' 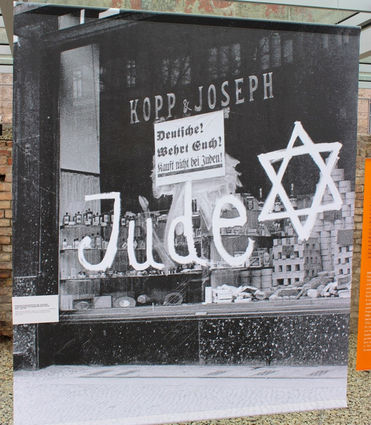 On July 23, the House passed H. Res. 246-a bill that condemns the movement to boycott, divest and sanction Israel specifically. The vote was 398-17. This is such good news, and a slight reprieve from all the craziness going on in the world.

Critics of the bill said that the resolution labels BDS supporters (against Israel) as anti-Semites. If the shoe fits... Anti-Israel BDS is anti-Semitic economic warfare to destroy the Jewish state and people-and is exactly what Nazi Germany did to the Jews of Europe.

Throughout history the Jewish people have been "boycotted" against: First the Russian pogroms in the late 1800s, early 1900s when Jews were ousted from their homes, having their personal items stolen by former "friends" as they fled their homelands. Russians were told not to help the Jews or face prison or execution. Then came the Nazis and the blatant BDS of Jewish businesses. The Nazi anti-Jewish boycott was the first official Nazi act of discrimination against the Jewish people, and set the stage for the Holocaust. Would we say the Nazis were anti-Semites? You bet your sweet bipbee. The Jewish people systematically lost their rights to have their own businesses, own their homes and property, and eventually were evicted, exiled and many led to extermination.

Signs were put in Jewish business windows. Some read "Protect Yourselves, Don't Buy from Jews." Other windows were splattered with the Star of David and "Jude." Buying from Jews would get you arrested or killed.

BDS of Israel essentially says: "Don't Buy From Jews." Colleges across America have stopped allowing students to spend a semester in Israel to study at the top-notch Israel universities. Academic lectures and authors have been turned away from speaking engagements solely because they come from Israel or live in America and are Jewish.

On the other side of the coin are those in Congress who oppose the anti-BDS resolution. Rep. Ilhan Omar (D-MN-5) introduced a bill titled H. Res. 496 before the House on July 16, 2019, "Affirming that all Americans have the right to participate in boycotts in pursuit of civil and human rights at home and abroad, as protected by the First Amendment to the Constitution."

At first glance, this sounds OK. Americans do have the right to participate in boycotts. It is an express of free speech. But why introduce a bill for something we already have? Because it is a backdoor attempt to allow the boycott of Israel. The last statement of the bill says that it "...urges Congress, States, and civil rights leaders from all communities to endeavor to preserve the freedom of advocacy for all by opposing anti-boycott resolutions and legislation."

"Omar's resolution also lies about history: H. Res. 496 asserts that the American boycott of the Nazis was "in response to the dehumanization of the Jewish people" instead of acknowledging the truth: The American boycott of Nazi Germany was in retaliation for the 1933 Nazi boycott of Jewish-owned businesses and Jewish professionals.

"Omar's resolution thus misleadingly refuses to mention or acknowledge the Nazis' anti-Jewish boycotts, and the horrors that stemmed from those boycotts.

"It is downright frightening that Omar and Tlaib have the gall to introduce a resolution that attempts to immunize anti-Jewish boycotts, and to compare Jews and Israel to Nazis."

Why the continuing fight to keep BDS of Israel? Israel is not an apartheid State. Israel does not dehumanize or unfairly treat Arabs who live among them. These are propaganda statements from those who promote BDS of Israel. And those of us who know better must constantly refute these lies. The root of the BDS movement is to destroy the Jewish State.