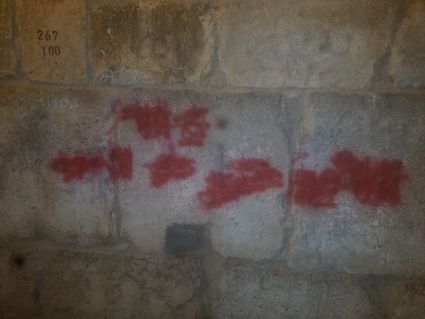 A view of the graffiti covered up on the Kotel HaKatan, July 2019.

(JNS)-A young Arab girl and her older teenage sister spray-painted the words "slaughter the Jews" in Arabic on Friday on the Kotel HaKatan ("little wall" in Hebrew), a portion of the Western Wall on the Temple Mount about 650 feet north of the Western Wall Plaza and next to the Iron Gate entrance to the Old City.

"Last Friday, I was going to pray, walking by the Kotel HaKatan right before Shabbat, around 7:30 or 8 p.m. At the entrance, I saw a small girl writing in Arabic right on the walls," said Rabbi Shimon Ben-Yashar.

Once Shabbat begins, Ben-Yashar explained, Jewish law holds that Jews cannot erase the paint, so the girl may have known-or perhaps was directed-to go at that exact time to paint on the walls, he speculated.

Rabbi Ben Packer, director of the Jerusalem Heritage House and resident of the Old City, saw the graffiti on Shabbat morning while walking with a group of tourists. By the time he arrived, others had marked the area with more spray-paint to cross out the anti-Semitic slur.

"We saw the writing in Arabic with a heart and a Muslim symbol," Packer told JNS. "The tourists were shocked by the whole thing."

While he noted that "sometimes, Arabs say the phrase out loud," he had not seen it written like this before, especially on the walls of a holy site.

"The graffiti was very bright; clearly, it took her a while to do it," he added. "Because they had to use special chemicals that are a bit problematic, the antiquities authority tried to stop the police from taking it down."

According to Deputy Mayor of Jerusalem Fleur Hassan-Nahoum, the police and Jerusalem municipality completely removed the graffiti by Sunday.

"Jerusalem is a place where we sanctify freedom of worship," Hassan-Nahoum told JNS. "It is unbelievable that young Arabs are still being brainwashed by their school's educators and surroundings to commit these acts of vandalism. We have a zero-tolerance policy, and will continue to ensure the law is respected and those who don't will be punished accordingly."

She noted that catching the girls was "in part thanks to the municipality's sophisticated CCTV camera system that is being installed across the whole city."

"We have been working on it for a number of years now," she said, "and the project is supposed to be finished this year."

'A continuous Jewish presence there'

Packer, on the other hand, posed that the municipality and police are not doing enough to protect less-known holy sites like the Kotel HaKatan.

"I think the whole area is incredibly neglected by the authorities, and this is what leads to these actions," he lamented. "I'm not excusing the actions of the girl; however, with no guards there and a lot of trash in the area, there is no show of the importance of this wall compared to any other wall that could be covered by graffiti. It's the city's fault as well for letting the situation be how it is."

He recommended that there be guards in the area at all times, "as there are many guards around the rest of the Kotel, and this piece of the Western Wall is even closer to where the temple stood."

"There should be a continuous Jewish presence there-an ark for Torah scrolls, chairs for people to sit and prayer books-and there shouldn't be an outhouse there. This could all be done in weeks, but it would take a bold decision" by the municipality, he suggested.