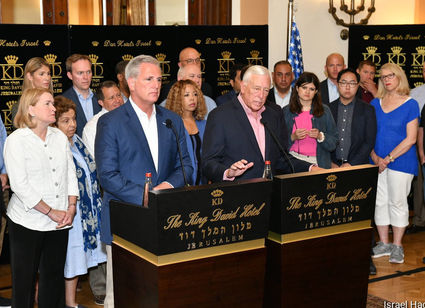 U.S. House Majority Leader Steny Hoyer and Republican Leader Kevin McCarthy with a delegation of members of the U.S. House of Representatives at the King David Hotel in Jerusalem on Aug. 11, 2019.

(JNS)-A total of 41 Democrats and 31 Republicans are in Israel on overlapping party tours to get a firsthand view of the complex security challenges Israel faces and to express their unconditional, bipartisan support for the Jewish state.

"This is the largest delegation that has ever visited Israel," said House Majority Leader Rep. Steny Hoyer (D-Md.), who led the Democratic delegation at a joint press conference of the two delegations on Sunday at Jerusalem's King David Hotel. "We have 32 freshman members in our delegation of 41. For many of them, it is their first visit to Israel," said Hoyer.

House Minority Leader Rep. Kevin McCarthy (R-Calif.) said that the U.S. relationship with Israel represents "an unwavering and undeniable bond, and the most important relationship we have in the Middle East. I want to emphasize that this is more than 15 percent of the entire U.S. House of Representatives with you right now."

The concurrent trips (the Democrats arrived on Aug. 5 and were scheduled to leave on Aug. 11, and the Republicans arrived on Aug. 9 and are staying until Aug. 15) come among growing political discord between the parties in the United States, as well as sharp criticism of Israel from the progressive wing of the Democratic Party. Most notably, rhetoric has sounded from three members of the four-person "Squad" of new congresswomen-Reps. Rashida Tlaib (D-Mich.), Ilhan Omar (D-Minn.) and Alexandria Ocasio-Cortez (D-N.Y.)-calling into question America's (and Congress's) relationship with Israel while promoting calls for the boycott of Israeli products.

In response to the boycott-promoting members who did not attend under the banner of #skipthetrip, Hoyer noted that Congress recently "passed the resolution in opposition to the BDS movement, which is a movement that seeks to undermine, we believe, Israel's security and safety," adding that the "resolution passed with 97.5 percent, and that is a clear indication of united support-Democratic and Republican support together-on behalf of the same vision."

He also said that "we believe in free speech, but we also believe that we ought not to be advocating either issues that could be perceived as, and are, anti-Semitic, or undermine Israel's security."

'The vibrancy of debate'

Regarding an Israeli Channel 13 report that U.S. President Donald Trump was upset that Israel was opting not invoke a law that prevents BDS supporters like Omar and Tlaib from entering Israel, McCarthy and Hoyer both denied the claims.

"I do not know of the president being disappointed," said McCarthy. "I speak to the president daily. He knows there are people who have differences of opinion."

Hoyer noted that the president related to the report as "fake news" and then drew comparisons between the political agreements currently taking hold in the United States and those that have been taking place for decades in Israel.

"We are like Israel, and you are like us-a very vibrant democracy that welcomes and accepts different points of view," said Hoyer. "We welcome different views because we believe the vibrancy of that debate makes us a better democracy and empowers us to make better decisions."

Rep. Brad Schneider (D-Ill.), a veteran of congressional missions to Israel, told JNS that by participating, new representatives are given the opportunity to learn firsthand about the threats Israel faces.

"This trip gives them the chance to understand the nuances, and appreciate the importance of the U.S.-Israel relationship," he said.

Regarding media focus on progressive opposition to longstanding bipartisan support, Schneider said that "when you are looking through a camera lens, it is kind of like looking into a room through a keyhole. What you see is a very little piece of the whole. If you take a step back and look at the reality, again, last month 398 people voted against BDS and in support of Israel."

He went on to explain that is precisely why such congressional visits are necessary.

"Why this trip is so important is so people can see more than just the camera lens, they can see the entire perspective for themselves," said Schneider.

Rep. Kim Schrier (D-Wash.) told JNS that "this trip has been incredible. It is an eye-opening experience. We got an inside view nobody else gets," adding that "getting a deep dive into the politics and talking to professors and heads of state has been incredibly instructive."

Rep. Kelly Armstrong (R-N.D.), on his first trip to Israel, told JNS he hopes that members of the delegations see for themselves "how small Israel is geographically and how that equates to a lot of the national security conversations that go on here.

"It's surrounded by a whole lot of countries that wish this people significant ill will," said Armstrong. "That plays into a lot of it."

"Israel is the only true democracy in the Middle East," Armstrong continued. "They are our oldest and closest ally in this region. And strengthening that is constantly what we should be worried about."