Pompeo: 'Jerusalem, Israel' on US passports is 'actively being looked at' 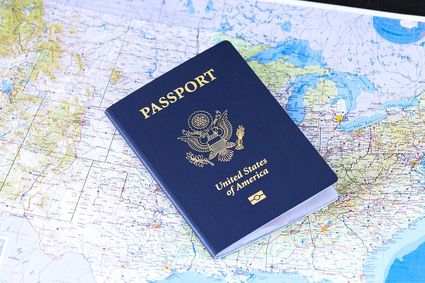 (JNS)-U.S. Secretary of State Mike Pompeo said on Thursday that the Trump administration is considering allowing U.S. citizens born in Jerusalem to list "Jerusalem, Israel" on their U.S. passports.

"We're constantly evaluating the way we handle what can be listed on passports," he told JNS in a wide-ranging interview. "It's something that's actively being looked at."

Despite the United States recognizing Jerusalem as Israel's capital in December 2017 and relocating its embassy from Tel Aviv months later, Americans born in Jerusalem are still unable to list "Jerusalem, Israel" on U.S. passports.

"The president has made clear that the specific boundaries of Israeli sovereignty in Jerusalem remain subject to final-status negotiations between the [Israelis and the Palestinians]," a State Department spokesperson told JNS in October. "We have not changed our practice regarding place of birth on passports or Consular Reports of Birth Abroad at this time."

Pro-Israel organizations responded positively to JNS regarding the development.

B'nai B'rith International CEO and executive vice president Dan Mariaschin said "it's encouraging news. This is a logical follow-on to moving the U.S. embassy to Jerusalem, and in the process, corrects a historical wrong which denied this designation for over seven decades."

"The [U.S.] Supreme Court has determined that the passport issue is within the purview of the administration, which has recognized Jerusalem as the capital of Israel," said American Zionist Movement president Richard Heideman. "It is most appropriate for passports for those born in Jerusalem, such as my three grandchildren born at Hadassah Hospital, to be listed as born in Jerusalem, Israel and not simply born in Jerusalem as if they were stateless, which they are not."

Jerusalem, said Pastor John Hagee, founder and chairman of Christians United for Israel, is the "eternal and undivided capital of Israel. This should be reflected in all aspects of relevant U.S. policy, including on passports of U.S. citizens born in Jerusalem, Israel."

"This is a very important and significant decision which affirms the long-standing fact that Jerusalem is Israel and isn't in "dispute,'" said Republican Jewish Coalition executive director Matt Brooks. "Once again, President Trump and his administration enacts a policy that the Jewish community has long sought and underscores why he's the most pro-Israel President in history."

Sarah Stern, founder and president of Endowment for Middle East Truth, said "it's about time that people who have been born in Jerusalem, Israel should have their state listed on a passport. We applaud Secretary of State Mike Pompeo for seriously considering it. It's outrageous that only American citizens born in Jerusalem have remained stateless for so long even with the U.S. embassy moved to Jerusalem."

"The National Council of Young Israel supported the Jerusalem Embassy Act of 1995 and have long advocated for U.S. Passports of Americans born in Jerusalem to say Jerusalem, Israel," said the group's president, Farley Weiss. "Listing Jerusalem, Israel on U.S. passports is a natural extension of the Trump administration's recognition of Jerusalem as Israel's capital."

"It is long overdue that this is corrected," said Malcolm Hoenlein, executive vice chairman of the Conference of Presidents of Major Jewish Organizations. "It is unfair to the Americans born in Jerusalem that their passports do not recognize the state. It does not prejudge or compromise the US position; it compliments U.S. law that recognizes Jerusalem as the capital of Israel."

AIPAC spokesman Marshall Wittmann said, "We have long advocated that those who were born in Jerusalem can list Israel as their place of birth for their U.S. passports."

Gauging the response of Arab countries

In 2015, the Supreme Court ruled in Zivotofsky v. Kerry that it is solely the president who has the power to recognize foreign entities in accordance with the U.S. Constitution's Reception Clause.

"Zivotofsky ruled in favor of the executive; he was not required to comply with the federal law," constitutional scholar Ilya Shapiro previously told JNS. "Trump, like Obama, can decline to stamp 'Israel' on the passport of a citizen born in Jerusalem."

Washington-based geopolitical strategist and diplomacy consultant John Sitilides told JNS on Thursday that the "passport designation decision is rather unsurprising-more of an inevitable matter of when than of will, given the Trump Administration's December 2017 decision to recognize Jerusalem as Israel's capital."

"What will be most noteworthy going forward are several paramount questions. What will be the response of Arab countries such Saudi Arabia, United Arab Emirates, Qatar, Bahrain, Egypt, Jordan and Morocco that are tentatively supporting the Trump administration's efforts to advance a breakthrough Israeli-Palestinian peace plan to include negotiations on Jerusalem's final municipal boundaries?

"Did the White House first notify these countries of its impending decision to gauge and ensure their continued support for the peace plan effort?" he posed. "And will this decision help Prime Minister [Benjamin] Netanyahu prevail in upcoming Israeli elections?"

The next round of Israeli elections will be held on Sept. 17, after the April 9 first round failed to result in a coalition government.