Ahead of Sept. 17 elections, Ayelet Shaked lays out right-wing vision for Israel 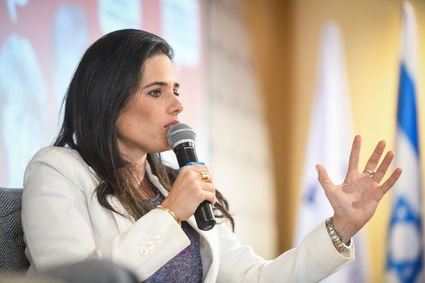 Yamina Party chairwoman Ayelet Shaked speaks at the Conference of the Manufacturers Association in Tel Aviv, on September 2, 2019.

(JNS)-While many Israelis might already feel fatigued by the upcoming elections on Sept. 17, former justice minister Ayelet Shaked, who heads the newly formed right-wing Yamina Party, is both making history and surging in the polls.

"I am the first female to head a right-wing political party in Israel's history," she told JNS.

Heading a party that is polling consistently at 10 mandates, which would make it the fourth-largest party in the Knesset, Shaked has been very open about her nationalist vision for Israel, including her take on the situation in the Gaza Strip, Israeli judicial reform, and settlements in Judea and Samaria.

On Monday night, Shaked made headlines when she told an overflowing crowd of English speakers at a campaign event in Bet Shemesh that Israel must undertake a wide-scale military operation in Gaza.

"We must choose the time that is best for us, evacuate the Israeli citizens who live in towns along the Gaza envelope in order to give us maximum flexibility, and we must uproot the terror from within Gaza," Shaked said, adding that Israel should not be tolerating rockets, incendiary devices and violent weekly demonstrations that emanate from Gaza.

Israeli Prime Minister Benjamin Netanyahu has been criticized by both the right and the left for his response to Hamas attacks-or more specifically, what they perceive as his lack of one.

Shaked pointed to two examples as the basis for this massive military operation. The first was "Operation Defensive Shield," which the IDF undertook in 2002 to uproot the Palestinian terror cells from the West Bank. The second is happening now in Syria.

"Israel acts to make sure that Iran does not establish itself and a base for terror against Israel in Syria. We act every time we see them beginning to take root," she explained. "We must change the situation on the ground in Gaza so that we can do the same thing there as well."

Shaked's Yamina Party is a hodgepodge of right-wing parties that come from different backgrounds, but share a nationalist agenda: the New Right, the Jewish Home and National Union. All three identify themselves as to the right of Likud, though they differ when it comes to religious issues. Shaked and the New Right include secular candidates and are more liberal; Jewish Home is religious and conservative; and National Union is more extreme.

But all three unified behind the leadership of Shaked, a secular woman.

One of her campaign's top items making her popular among right-wing voters is a promise for judicial reform. Shaked served as justice minister from 2015 until earlier this year, where she was focused on undoing the "judicial activism" of the left-leaning Israeli Supreme Court.

"I started to do a lot there," said Shaked, pointing to her appointments of more conservative and nationalistic judges as an example of the change in direction she brought to the position.

"One cannot reverse the judicial activism initiated by Chief Justice Aharon Barak over the course of 20 years in just four years," she said, referring to the longtime Supreme Court justice who used the court to implement his more liberal views.

She has also made it clear that there is more work to do regarding the legal structures for settlements in Judea and Samaria, as well as combating the influence of NGOs funded by foreign entities.

Another right-wing issue Shaked hopes to tackle in the next government is Palestinian illegal construction in Area C-the region in the West Bank where Israel has complete military and civilian control under the Oslo Accords.

Shaked accused former Palestinian Authority Prime Minister Salam Fayyad of making it more difficult for Israel to annex Area C by pushing construction without permission. She believes that the defense ministry should make it a priority to stop these moves, being "tough and committed to enforcing the law."

On foreign policy, Shaked talked about the support Israel has been receiving from the Trump administration. While she jokingly told the audience in Bet Shemesh that U.S. Ambassador to Israel David Friedman and National Security Advisor John Bolton would be welcome in her party, she was quick to add that despite the disagreements Israel has had with more progressive elements in the Democratic Party, "Israel must work to maintain bipartisan support from its closest and most important ally."

Regardless of how Yamina fairs on Sept. 17, a new leader has emerged within the Israeli right-one who is determined to continue leading for the long term.