No water, no electricity, and whole families living in cars 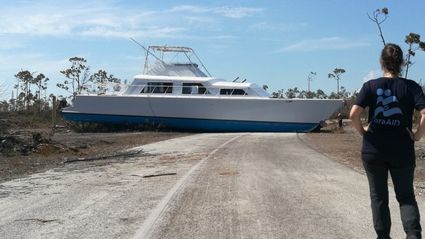 An IsraAID team member observing the scene following Hurricane Dorian in the Bahamas.

(ISRAEL21c)-Michal Bar, head of emergency operations for Israeli humanitarian NGOIsraAID,  doesn't mince her words. "The level of destruction is shocking," she says.

"Since we arrived in the Bahamas last week, we have visited communities in both affected regions-the Abaco Islands and Grand Bahama Islands," Bar told ISRAEL21c. "In Abaco there are about 17,000 affected people and in Grand Bahama there are about 50,000. People here are waiting for information and for relief."

Bar is leading a seven-person IsraAID emergency response team that began providing assistance to the island nation on Sept. 5.

Hurricane Dorian was the most powerful hurricane to hit the Bahamas in the country's history, with peak sustained winds of 183 miles per hour. The 48 hours it battered the Bahamas resulted in 45 deaths confirmed so far, tens of thousands displaced from wrecked homes and many hundreds of residents still missing.

"On our first day here, we took the first flight to the reopened airport at Treasure Cay in Abaco Islands. As we arrived, the only thing you could hear was the air being cut by the blades of the light airplane that took us – otherwise, it was silent," reports Bar.

"We saw large-scale destruction. Huge amounts of debris from flattened structures, severed trees, plastic, garbage and bottles were covering the ground. Sitting amid the debris were lines of families waiting to be evacuated."

Among those were Sheerin and Batisse from Marsh Harbour in Abaco, parents of three children aged five months to seven years. They told the IsraAID team their community was devastated by the storm.

"They have been living in a vehicle with two other relatives since Sept. 1 as they wait to be evacuated. When I spoke to them, they said they have hope, but now the community needs help and support to build itself back up."

Bar said that the economic situation in the Bahamas is deteriorating, "with shortages of fuel and long lines at gas stations. There is no electricity or running water in the affected areas."

Now downgraded from a Category 5 hurricane to a post-tropical storm, Dorian has moved north but left the Bahamas in a state of severe crisis.

IsraAID also is coordinating relief efforts on the island in partnership with the Grand Bahama Disaster Relief Foundation.

"At the moment we're focusing on Freeport, the biggest city in Grand Bahama," said Bar. "The city was hit twice, first by the strong winds of the hurricane, which destroyed many houses, and second by flooding, which left entire neighborhoods where the houses are still standing as empty shells. A lot of people are staying in their empty houses, waiting for assistance."

Bar's team is working with a coalition of churches through the Caribbean Israel Leadership Coalition to reach communities in Grand Bahama.

"We are designating two distribution points in Freeport, one near the airport and one at the port. We are working together with Chabad, who are generously providing a significant donation of supplies for distribution, and we have [an eighth] team member deployed in Florida helping to coordinate shipments," said Bar.

"Hygiene and sanitation are key concerns. We will be distributing hygiene kits, including toiletries and personal sanitation supplies such as toothbrushes, hand sanitizers, soap bars, and quick-dry towels. I have visited shelters where the only product they have available is pure bleach," she added.

Compounding all these difficulties is the lack of anything for local children to do, which can lead to dangerous situations.

"The schools are not operational and there is an urgent need for organized child protection activities, so we will be operating 'Child Friendly Spaces' to support children in affected communities."

Despite the grim reality, Bar emphasized, "People here have a lot of faith and hope. Communities need to regather and regroup and see what they can do to ease the daily lives of their members, which is something our team is working to support." 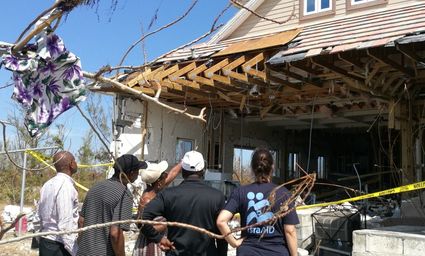 Hurricane Dorian forced tens of the thousands of Bahamas residents from their ruined homes.

As it does whenever it responds to a humanitarian disaster anywhere in the world, IsraAID has pledged to remain on the ground beyond the initial crisis.

"We will stay for as long as we are needed to provide emergency relief now and support communities as they recover and rebuild," said Bar.