As Moscow waits for Israeli electoral outcome, the future of Syria looms over relations 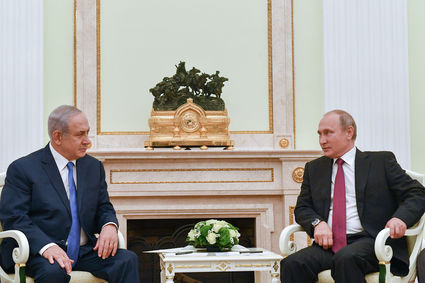 (JNS)-When Israeli Prime Minister Benjamin Netanyahu flew to Sochi in Russia last month to meet with Russian President Vladimir Putin, the event turned into a political football back in Israel.

Seizing on the fact that Netanyahu was made to wait for almost three hours to see Putin (allegedly because the Russian leader was late returning from an event in Dagestan), Netanyahu's political rival, Yisrael Beiteinu leader Avigdor Lieberman, stated on Sept. 13 that "in Russia, nothing happens by chance. Everything there is planned to the smallest detail. When they hold the prime minister of Israel in a waiting room for nearly three hours, this is probably not by accident."

Lieberman suspected that the visit was part of Netanyahu's political campaign to steal Israeli-Russian votes away from his party, though the fact that Netanyahu waited for as long as he did also raised wider questions about the true state of Israeli-Russian relations.

Since becoming militarily involved in the Syrian war in 2015 on behalf of the Bashar Assad regime, Russia set up a deconfliction channel with Israel to avoid mishaps and pledged understanding for Israel's major concerns over Iranian entrenchment.

Russia has also condemned Israeli airstrikes in Syria designed to prevent that very entrenchment. On Sept. 20, Russian aviation website Avia.pro carried an unconfirmed report claiming that Russian fighter planes shot down an Israeli drone allegedly on its way to attack a target in Syria.

"I think we are in a holding period, as Putin waits to see what the electoral outcome in Israel has in store," Charles Freilich, former deputy Israeli national security adviser, told JNS.

Freilich, a senior fellow at Harvard's Belfer Center, said part of the special relationship Putin has had with Netanyahu "was based on the feeling that they were both strong leaders whose political futures were virtually assured, and thus that they were both capable of making decisions and closing quiet deals."

The Russian president would of course, work with Blue and White Party leader Benny Gantz, assessed Freilich, "but he is an unknown quantity, and [Putin] will want to size him up first. Putin is as unsentimental as they come, but maybe surprisingly, I do think he has some sort of warmer, or should I say less cold, attitude towards Israel."

"I don't think anything has changed in the two countries' strategic interests vis-à-vis each other," he continued. "Israel still needs Russian help in keeping the Iranians and Hezbollah as far as possible from the border, and from preventing Iranian entrenchment in Syria and arms transfers through its territory. Russia wants to keep a lid on things in Syria and continues to play the different sides off of each other. So it can tolerate repeated low-level Israeli airstrikes, but wants to make sure that things don't get out of hand."

While Putin's approach to Israel has largely been transactional, his public remarks regarding the Jewish state indicate a degree of recognition of the common bonds between the two nations. Putin noted last month that he views Israel as a "Russian-speaking" country-a reference to its sizable Russian immigrant population;he also announced plans to visit Israel next year as part of a 75th-anniversary commemoration of the liberation of Auschwitz by the Red Army.

Still, some are suspicious of the visible picture that is presented of bilateral relations. Brig. Gen. (Res) Nitzan Nuriel, former director of the Counter-Terrorism Bureau in the Prime Minister's Office, said that if the Russian leader's decisions regarding Israel are examined in recent years, what can be construed is that "he has not taken any decision that is good for us."

Despite seemingly good relations between Netanyahu and Putin, Moscow has decided to supply "air-defense systems to all of our enemies, takes substantial action against our activity in the sector, and therefore cannot be trusted," cautioned Nuriel.

Zvi Mazel, the former Israeli ambassador to Egypt, Romania and Sweden, argued that although Russia "doesn't much like Iran, it has no choice but to [work] with it. It allows Israel to attack; there has been no chance on this issue."

"The Russians know very well if Iran entrenches itself in a serious manner in Syria and isn't stopped, then a war will break out. It would be a very difficult war," said Mazel, a senior analyst at the Jerusalem Center for Public Affairs.

"At a certain stage, if there will be no choice, we'd even have to send ground forces in Syria; this could complicate the entire situation, including their situation," he added.

Ultimately, Russia's objective is to stabilize Syria-a mission extremely hard to accomplish in light of the Iranian and Turkish involvement in the country. According to Mazel, the two countries are pursuing contradictory interests, with each seeking to exploit Syria's weakness to operate within it.

"Russia is in an uncomfortable situation," he stated. "Turkey wants to set up a 32-kilometer security zone and put a million Syrians in it. The Americans are also embarrassed by the situation.

"I think Russia has no choice in this situation," he continued. "It engages with all sides, zigzags, but understands our interests very well. For Israel, it is almost a matter of life and death."