Pre-indictment hearings begin in Israel, putting Netanyahu on the political sidelines for now 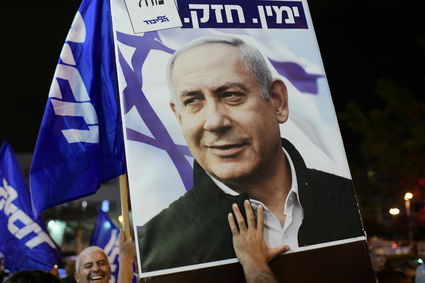 Israelis demonstrate in support of Prime Minister Benjamin Netanyahu outside the house of Attorney General of Israel, Avichai Mandelblit, ahead of the hearing on the corruption cases in which Netanyahu is a suspect, on Oct. 1, 2019.

(JNS)-Israeli Prime Minister Benjamin Netanyahu's pre-indictment hearing began on Wednesday after three years of investigation. Netanyahu, who did not attend the hearing, is seeking to convince Attorney General Avichai Mandelblit and state prosecutors not to indict him on charges of bribery, fraud and breach of trust in three separate cases, labeled in Israel as Case 1000, Case 2000 and Case 4000.

Attorney Avi Himi, who heads the Israel Bar Association, told JNS that "the hearing process is extremely significant," and the prime minister's legal team is given a sincere opportunity to change the minds of the attorney and his staff about an indictment. "We won't truly know the direction to which this is all heading until after the hearings," he said.

Twelve defense attorneys are representing the prime minister before more than 20 officials from the justice ministry who have been involved in the investigations throughout the process. The attorney general, who announced tentative indictments against the prime minister pending the hearings, has said that he will come to a final decision regarding whether or not to indict the prime minister by December.

Former police prosecutor and current criminal-defense attorney Nava Zarnagar explained to JNS that "the hearing gives the prime minister the chance to present why the proofs against him or even the public interest do not justify an indictment."

The first two days of four days of hearings in the justice-ministry offices in Jerusalem will focus on Case 4000-viewed as the most serious-in which the attorney general announced his intention to indict the prime minister for bribery.

Netanyahu's defense team acknowledges that the prime minister gave benefits to Bezeq, but that they were based on professional recommendations and have no connection to coverage the prime minister received on Walla. Netanyahu's defense also claims that he didn't even receive positive coverage on Walla-that at best, it was balanced coverage, and that there is no precedent for a bribery charge when the "payment" was supposed to be favorable press.

The prime minister's attorneys will present his defense for Case 1000 and Case 2000 on Sunday and Monday. In both, he faces charges of fraud and breach of trust. In Case 1000, the prime minister and his wife are accused of receiving hundreds of thousands of shekels worth of champagne, cigars and other gifts from Hollywood producer Arnon Milchan. The indictment draft decision pending the outcome of the hearing states that Netanyahu acted "in favor of Milchan in numerous personal and business affairs." This serves as the basis for the claim of conflict of interest.

The prime minister's defense will continue to suggest that the office-holder "is allowed to accept gifts from friends." Netanyahu has also suggested that his wife asked for the items without him knowing about it, and that any assistance he gave to Milchan was permissible by law.

Case 2000 relates to a deal that Netanyahu tried to make with Noni Mozes, publisher of the Israeli newspaper, Yediot Achronot.

State witness Ari Harow, who served as Netanyahu's bureau chief at the time, submitted recordings that have Netanyahu asking him to make calls between him and Mozes in which Netanyahu offers to promote a law that would limit the influence of Israel Hayom, Yediot's primary competitor, in exchange for better coverage about him in Yediot and its website, Ynet. The draft indictment states that by doing so, the prime minister "violated the trust he owes the public, and severely hurt the image of public service and public faith in it."

Both Netanyahu and Mozes claim that they had no intention of acting on the proposal; that both were trying to manipulate the other.

Former police prosecutor Zarnagar told JNS that even if the prime minister's legal team does not succeed in closing the cases against him entirely, "during the hearing process, they can show new evidence, refute evidence or explain evidence to the point that the attorney general will reduce the severity of the charges" against the prime minister. Lesser charges could minimize the political fallout of an indictment against Netanyahu.

Still, Netanyahu has made several public declarations that the cases against him would be closed following the hearings and even made a request, which was denied, for the hearings to be shown on live television. One of his attorneys, Amit Hadad, told IDF radio that the defense team will bring new evidence to the table during the hearings, and that once he studies it, the attorney general "will have no choice but to close all files" against the prime minister.

Israeli law allows for a prime minister to continue serving even while under indictment. But at the moment, the prime minister's political future seems to hang in the balance based on the results of these four days of hearings.

If he is indicted, he does not have the support of enough political parties to form a government coalition, and calls for his resignation could force him out of office. If he isn't, that could pave the way for him to form a national unity government with the Blue and White Party, thereby enabling him to continue serving in Israel's top job.