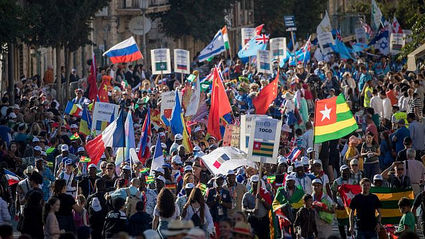 Thousands of Christian evangelists and Israelis march at a parade in center of Jerusalem, marking the Jewish holiday of Sukkot, Oct. 10, 2017.

(JNS)-This year, more than 5,000 Christians from all parts of the world gathered on Thursday for the city's annual Sukkot (Feast of Tabernacles) festive march around Israel's capital, which saw 10,000 participants in total.

The Jerusalem municipality organized and funded the march and entertainment events, with participants coming to Israel from 100 nations. The arrival of the Christian pilgrims, who come annually to Israel for Sukkot, was facilitated in part by the International Christian Embassy Jerusalem, which connects Christians around the world to Israel based on the biblical significance of Jerusalem and in support of its connection to the Jewish people.

"The whole world is learning that the gentiles can come celebrate the Feast of Tabernacles with the people of Israel," David Parsons, media spokesperson of ICEJ, told JNS.

"It's an ancient tradition that we've revived over the past 40 years, and [it shows that] we live in and need prophetic times," he continued, adding that the visitors represent "a lot of admiration for Israel, and all it has been able to accomplish over the last hundred years of the ingathering of the Jewish people and the restoration of the nation."

"They want to come see the modern miracle of Israel which the Bible talked about," he said.

This year, ICEJ brought its first delegation of evangelical Christians from Egypt, inspired by a biblical passage (Zechariah 14:18) that states that if the community of Egypt does not make the Sukkot pilgrimage to Jerusalem, it will suffer drought.

Pastor M. Moran Rao, director of a Christian ministry in Visakhapatnam, India, also visited Jerusalem with his wife for the Feast of the Tabernacles in order to be blessed.

"We came to Jerusalem and the march because we love Israel, we are friends of Israel, we stand with Israel, and we support Israel," he told JNS.

Rao explained his biblically-based belief that coming to Jerusalem will bring blessings for his ministry in southern India, who he has previously brought for the Sukkot festival: "In the Bible, it says to pray for the peace of Israel, and if you bless Israel, you will be blessed."

He maintained that the march is prophetic, as the Bible speaks of a time when "everyone from four corners of the earth will come and rejoice in Jerusalem."

The main march passed through the city's main streets, starting from Bezalel Street and continuing to Hillel Street, King David Street and concluding near Liberty Bell Park at the First Station Compound.

'The charm of the city'

Jerusalem Mayor Moshe Leon, accompanied by the police orchestra, led the crowd towards the YMCA, where he greeted the marchers.

"Tens of thousands of residents and visitors from all over the country who come to Jerusalem and walk to its beautiful and rooted sites are an exciting and unique spectacle," said the mayor. "Jerusalem hosts hundreds of thousands of visitors and tourists during the Sukkot holiday, enjoying the charm of the city, our amazing sites and the unique attractions that only exist in Jerusalem," he said.

In addition to the annual march, the day's events included a morning nature trail march and events for the family at Sacher Park, including entertainment stages, live performances and concerts, fair stalls and children's activities. Israeli-Arab singer Nasrin Kadri played on the main stage, with additional performances by an African circus, dance bands and artistic gymnastics bands.

Another stage for children included an inflatable complex, a clown complex and a gym, performances, circus shows, creative workshops, music and a zombie show.

Between the main stages, visitors enjoyed a 30-minute aerial acrobatics shows, as well as drummers and dancers' circles.