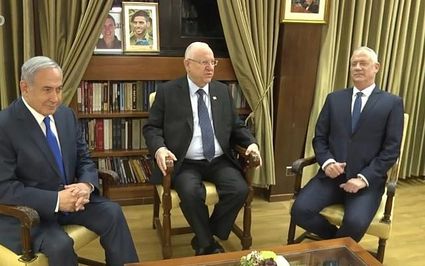 Two days shy of his 28-day time limit to establish a government, Prime Minister Benjamin Netanyahu announced on Monday that he cannot form a coalition and that he is returning the mandate to do so to President Reuven Rivlin, paving the way for Benny Gantz, leader of Kahol Lavan (Blue and White party) to try to create a government.

Gantz will have 28 days to try to form a coalition. What happens if the Gantz-led coalition talks also fail? Then any lawmaker backed by a majority of at least 61 Knesset members would be the next one to have a go at forming a coalition. If a coalition of 61 members can't be formed, Israelis will be heading to the polls for a third election.

Blue and White told The Times of Israel it was determined to build a "liberal unity government" with Gantz at its helm. Discussion of a unity government, with a rotation agreement between Gantz and Netanyahu-a four-year coalition with Netanyahu serving two years and then Gantz serving two years-was thwarted apparently by Yair Lapid who does not want Gantz to conclude a rotation agreement with Netanyahu, but wants a government formed without Netanyahu.

In a video statement, Netanyahu said he had worked "incessantly" over the past 26 days to form a "broad national unity government," which would include his Likud party's religious allies and the rival Blue and White party. "That's what the people want," Netanyahu said. "That's what Israel needs in light of the growing security challenges it faces."

"Gantz has consistently refused to come to the negotiating table," Netanyahu said.

According to Times of Israel, Netanyahu was tasked by Rivlin with trying to form a government based on the strength of his pact with right-wing and ultra-Orthodox parties to negotiate as a bloc of 55 MKs after Sept. 17's inconclusive elections (Likud: 32; Shas: 9; United Torah Judaism: 7 and Yamina 7). Gantz heads a bloc of 54 MKs from the center, left and Arab parties (Blue and White: 33; Labor-Gesher: 6; Democratic Camp 5; and 10 MKs from the mainly Arab Joint List). But the 10 Arab MKs in that group would not join a Gantz-led coalition. (Three other MKs from the Joint List did not back either candidate.)

Avigdor Liberman's Yisrael Beytenu holds the balance of power between the Netanyahu- and Gantz-led blocs, with eight seats, and has called for a secular unity government comprising of Likud, Blue and White and his own party. But Netanyahu has refused to abandon his ultra-Orthodox partners Shas and United Torah Judaism. And Gantz has hitherto refused to partner Likud so long as Netanyahu is facing possible indictment in three corruption cases.