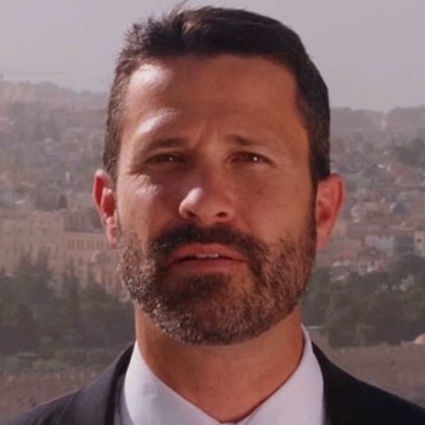 Rabbi Jeremy Gimpel is a young man who has accomplished quite a bit in his lifetime. A Sgt. Major in the IDF reserves, he is one of Israel's premier media personalities. He and Rabbi Ari Abramowitz are internationally acclaimed media personalities who have been fighting side-by-side to share the truth about Israel with the world for over a decade.

On Sunday, Nov. 10, Gimpel will share his message of living in and transforming the hills of Judea with the Orlando Jewish and Christian communities at Fellowship Church in Winter Springs.

The two-man team have created many short documentaries about Israel and produced music videos that have had more than 20 million views on YouTube. They also founded the podcast The Land of Israel Network, an English-language broadcast network based in Judea. Considered the No. 1 podcast in Israel, the network has an all-star lineup of veteran Israeli radio show hosts, TV personalities, journalists, educators and activists who share the truth about Israel with the world. Gimpel has been featured on Fox News, BBC, CNN and other international news outlets where he freely voices his opinions about Israel, Judea and Samaria and Israeli sovereignty.

In 2018 Gimpel with his family and four other families founded the Arugot Farms. Also known as Ma'ale Amos, the settlement is in South Eastern Gush Etzion, Judea.

Gimpel's website, http://www.thelandofisrael.com, states: "Located in the heart of the biblical "Wilderness of Zif" where King David composed many of the Psalms and hid from King Saul, the Arugot Farms, in just a few years, has been transformed from a barren desolate wilderness to a Garden of Eden-like oasis, unlike anything in The Land. From afar, the Arugot Farms appear on the horizon like an ancient Judean kingdom. At its center is a castle-like retreat center rising from the dust. Nearby, a house of prayer stands, unparalleled in its mystical beauty."

In a very short time these pioneering families have planted organic vineyards, over five thousand blossoming fruit trees, developed an innovative ecological pool, and shepherd a flock of sheep.

Gimpel is excited for visitors to Israel to see the settlement. "Reading about the Arugot Farm versus experiencing its magic can be likened to seeing a sheet of musical notes rather than experiencing a Philharmonic Orchestra," he said about his homeland. 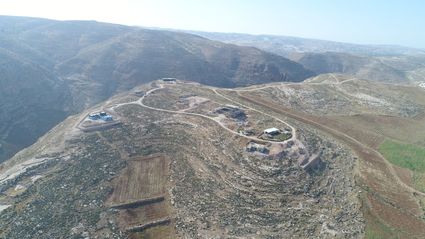 Aerial view of The Arugot Farms.