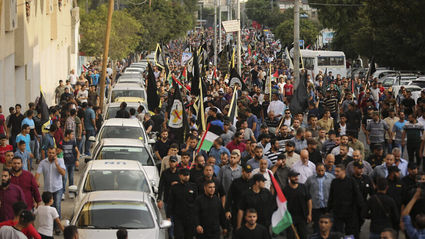 Palestinian Islamic Jihad activists participate in a march to mark the anniversary of the 32nd founding of the Jihad Organization in Gaza City, on Oct. 5, 2019.

(JNS)-Palestinian Islamic Jihad-the second-largest armed terror faction in Gaza after Hamas-is agitating for violence, and is in fact the organization that conducted Friday-night's rocket barrage on the Israeli border city of Sderot.

It appears as if the commander of the PIJ's northern Gaza brigade-a terror chief named Baha Abu Al Atta-is directly behind the latest rocket fire that targeted Israeli civilians.

The Iron Dome air-defense system intercepted most of the incoming rockets, though one struck and damaged a civilian home.

Hamas is the Islamist regime that runs Gaza, but PIJ has been challenging its authority repeatedly in recent months. PIJ has both an interest and an ability to destabilize the security situation with rocket fire.

PIJ wishes to position itself as the "authentic" jihadist organization in the Strip at the expense of Hamas, which unlike PIJ has to balance out its considerations as a government with its commitment to armed conflict and terrorism.

Hamas's nightmare scenario is a popular revolt by Gazans who lose patience with their regime's dead-end policies and economic failures. Unrest in Lebanon and Iraq could fuel such protests at any time. As a result, Hamas is holding out for the results of negotiations it is holding with Egypt and the United Nations aimed at preventing an economic collapse in the coastal enclave.

PIJ, in contrast, has no such concerns. It is more than willing to use its rocket arsenal, which is larger than that of Hamas, to upset the security situation. Iranian funding and rocket-production know-how has helped make PIJ a significant terror army, with some 15,000 armed operates (compared to Hamas's 25,000-strong military wing). Hamas receives Iranian funding and support as well.

Since May 2019, PIJ has significantly stepped up attempts to launch attacks against Israel out of Gaza. Most of those attempts have been thwarted, but many more attack plots remains, and the organization's intent is crystal-clear.

In retaliation for the rocket barrages, the Israel Air Force struck multiple Hamas targets throughout Gaza early on Saturday. One man, reportedly a Fatah member, was killed in the airstrikes.

Hamas's leader, Yahya Sinwar, remains a strong figure who has been able to implement his regime's rule over the other organizations in the past. Nonetheless, Israel's message to him is consistent and clear: Hamas is responsible for what happens in Gaza, and it will receive the bill when Israeli civilians come under fire. If Hamas wants to avoid Israel's firepower, then it must reign in PIJ.

If Hamas fears a confrontation with PIJ, it will face conflict with Israel instead.

Stabilizing factors vs. catalysts for violence

Israel is not the only country in the region interested in stability in Gaza. Egypt, too, as well as the United States and European countries, has been trying to decrease tensions and improve Gaza's humanitarian state of affairs. Currently, PIJ alone is actively disrupting these efforts.

In its airstrikes on Saturday, the Israel Defense Forces marked out targets that serve as a reminder that while Hamas is currently in favor of a truce, it is still investing the big majority of its resources in building a terrorist army for a future war, while demanding that others take care of Gaza's neglected civilian needs.

The targets struck by the IAF include Hamas's naval force military compound, a site containing an air-defense array, training compounds, weapons production and storage sites, and other structures.

The IDF Southern Command remains on high alert for a new escalation in Gaza. But as part of efforts to prevent a new war, Israel is ensuring that 600 to 700 trucks per day containing international assistance goods enter the Hamas-run enclave via the Kerem Shalom Crossing.

The trucks deliver fuel, imports, medicine, construction goods and other essential materials. Qatar is also continuing with its monthly transfers of funds into Gaza, which goes to families and construction projects. The Palestinian Authority in the West Bank has been trying to choke Gaza economically to damage its internal foe, Hamas.

Ultimately, the competition between stabilizing factors and the catalysts for violence will determine Gaza's fate.

According to reports, the Israeli cabinet is looking to keep Gaza on a "low flame" because larger and more severe threats are looming to the north.

The Israeli defense establishment is focusing its readiness on the northern front, where Iran and Hezbollah are looking to build new attack capabilities.

These include upgrading Hezbollah's rocket arsenal into precision guided missiles in Lebanon and entrenching Iran's attack bases throughout Syria. Israel is actively working to disrupt both of these Iranian objectives. To help it achieve this mission, Israel is prioritizing the north over Gaza.

That formula has held up until now, but if PIJ remains determined to rock the boat, it could collapse into yet another Gaza war.