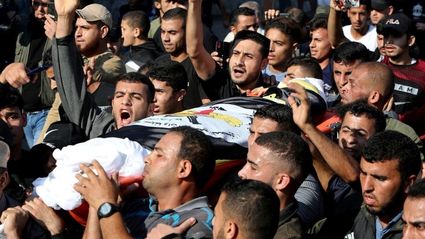 After Israel killed a top commander from the Iranian-backed Palestinian militant group Islamic Jihad in a rare targeted strike in the Gaza Strip on Tuesday, the group's leader said that Israel has pushed the group "to go to war."

Palestinian Islamic Jihad released a statement saying, "These terrorist crimes are aggression and a declaration of war on the Palestinian people, and the enemy bears for responsibility for them."

Additionally, Secretary-General Ziad al-Nakhala of the Palestinian Islamic Jihad told the Dar al-Hayat Arabic-language news site, "We are going to war. Netanyahu has crossed all the red lines in assassinating Al-Quds Brigades Commander Baha Abu al-Ata. We will respond forcefully."

Approximately 150 rockets had been launched at Israel from the Gaza Strip by Tuesday morning when news of the IDF's assassination broke. About 60 of those rockets were reportedly intercepted by Israel's Iron Dome missile defense system.

Israeli Prime Minister Benjamin Netanyahu said in a televised address to the nation that the strike on Abu al-Ata was approved by Israel's Security Cabinet 10 days ago, noting that he was planning more and imminent rocket attacks on Israel. The IDF was told to strike when it found an opportunity, he said.

Netanyahu informed Blue and White party head Benny Gantz, a former IDF chief of staff who is working to form a coalition government, of the plans to assassinate Abu al-Ata ahead of the strike.

Gantz offered his support for the assassination. "The fight against terror is ongoing and requires moments in which difficult decisions must be made.  The political echelon and the IDF made the right decision last night for all Israeli citizens and the residents of the South," he said in a statement. "Blue and White will support all appropriate decisions made for the security of the State and will put the security of all of its residents above politics. Every terrorist who threatens our security should know that he will end up dead."

The IDF operation to assassinate Baha Abu Al Ata was extremely skillful, reportedly targeting not just the building where Al Ata was staying, but the very room he was in. The Army's goal was to avoid civilian casualties.

"Over the last week, we have been waiting for the opportune moment to conduct the surgical strike," IDF spokesman Jonathan Conricus said.

Conricus added that the airstrike had been carried out with a warplane that destroyed only the floor of the building where Abu Al Ata was hiding in order to minimize "collateral damage."

The airstrike damaged the half of the second and most of the third floor of a house in the Shejaiya neighborhood, in the eastern part of Gaza City. The house was known to be Abu Al Ata's home.

Prime Minister Benjamin Netanyahu said the decision to kill the Islamic Jihad commander was made on Sunday by the cabinet.

"Senior Islamic Jihad commander Baha Abu Al Ata was targeted overnight in Gaza. He was responsible for many terrorist attacks and the firing of rockets at Israel in recent months and had intended to carry out imminent attacks," Netanyahu's office tweeted.

"The IDF action was recommended by the IDF Chief-of-Staff and ISA Director and was approved by the Prime Minister and Defense Minister after it had been presented to-and approved by-the Security Cabinet."

Conricus called Abu Al Ata a "ticking time bomb," saying he had been responsible for a number of recent rocket attacks on southern Israel and claimed that he was actively planning new attacks.

Gaza's Health Ministry said a man and a woman were killed in an airstrike at a house and two other people were wounded. Relatives and the Islamic Jihad said the woman was Abu Al Ata's wife and the wounded were their children.

The terrorist group said Abu Al Ata, 42, was undergoing "a heroic act" when he was assassinated. It did not elaborate, but vowed revenge.

Minutes after the Iran-backed group confirmed the death, barrages of rockets could be heard fired toward Israel. Air raid sirens continued to go off throughout the morning as far away as Holon and Rishon LeZion, two suburbs of Tel Aviv.

Israel on Tuesday also shut down crossing points into Gaza and reduced the permissible fishing area off the territory's coast to 6 nautical miles in anticipation of a looming confrontation.

In Israel, schools were canceled in communities and towns along the Gaza Strip's boundary and all the way to Tel Aviv, about 90 kilometers (56 miles) north of Gaza.

Israeli citizens were warned to stay near bomb shelters.

"We are prepared for several days of battle, with an aerial defense shield, including in the center of the country," Conricus said.

Islamic Jihad is an Iranian-backed group that often carries out attacks independent of Hamas, the larger militant group that controls Gaza.

But Conricus described Abu Al Ata as a powerful figure in Gaza who often acts alone without instruction from Tehran or Hamas.

He said Israel had no further plans to resume its assassinations of militant leaders-a practice that in the past has triggered heavy fighting. "There was no other choice," he said.

Since Hamas took over Gaza by force in 2007 from the internationally backed Palestinian Authority, Israel and Gaza terrorists fought three wars, with the third in 2014 lasting for 50 days and was the deadliest and most destructive.

Short-but-frequent spasms of violence have occurred, the latest earlier this month when about 10 projectiles were fired at Israel, which accused Abu Al Ata of being behind them.

Since the 2014 war, Israel has mostly refrained from targeted assassinations of senior Gaza terrorists, but did so one time in May, Israeli airplanes killed a Hamas commander and financial broker in a car traveling in Gaza City during a three-day exchange of fire.