Sister of Israeli-American woman jailed in Russia: 'She's losing it' 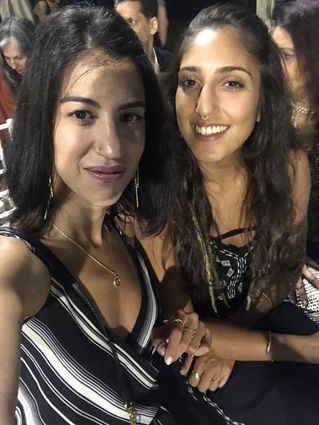 (JTA)-In August, Liad Goldberg visited her sister in a Russian jail. It had been four months since Naama Issachar had been arrested at a Moscow airport while on a layover and accused of drug smuggling, and Goldberg was seeing her sister for the first time since the arrest.

The sisters spoke through a glass partition that prevented them from touching. Later, Goldberg watched as Issachar was led into a courtroom for a hearing.

"They had her in handcuffs," Goldberg recalled. "It's really sad."

Iassachar, a 26-year-old Israeli-American, was on her way home to Israel from India in April after completing yoga teacher training. Russian officials said they found 9 grams of marijuana in her bag. Issachar denied the drugs were hers.

Initially it seemed a straightforward case. Issachar's family told The New York Times that her lawyer said a typical punishment would be no more than a month's detention, a fine and expulsion from the country. But the initial charges of drug possession were upgraded to smuggling, and last month a Moscow court sentenced Issachar to 7 1/2 years in prison.

Issachar is struggling emotionally in jail, says her sister, a 32-year-old production assistant who lives in Los Angeles.

"Physically, she's safe and everything, but I personally truly worry for her emotional and mental well-being," Goldberg told the Jewish Telegraphic Agency in a phone interview Monday. "My mom saw her a couple of days ago and she's losing it. She can't really take it anymore."

Israeli officials reportedly believe Russia is trying to use her as a bargaining chip to secure the release of Alexei Burkov, a Russian hacker held by Israel who is set to be extradited to the United States. Israeli Prime Minister Benjamin Netanyahu has slammed the Issachar sentence as disproportionate and tried to intervene-so far unsuccessfully-on her behalf.

Meanwhile, Issachar's family has worked tirelessly to get her home. Since April, her mother has traveled back and forth between Israel and Russia, where she is allowed to visit her daughter in jail twice a month. Goldberg organized rallies last month in New York and Tel Aviv calling for her sister's release.

"When I really sit down and think what it must be like for her, I think my mind goes into such dark places and it's so sad for me to think about," Goldberg said. "I almost have to distract myself by doing something else because the thoughts are torturous."

On Tuesday, Issachar's mother asked to cancel an appeal to Israel's Supreme Court to delay extraditing Burkov to the United States, saying "Naama will not be a pawn for the Russian hacker and his people." The court on Sunday had ordered a temporary halt to the extradition, which had been ordered last week by the Israeli justice minister.

Goldberg slammed a recent report by the Russian news outlet RT in which her sister was quoted as speaking positively about her conditions and about doing yoga in her cell.

"That's not true," Goldberg said. "She later said that she felt very pressured, that she had no idea that these reporters were coming to speak to her. A lot of that stuff is false information."

The sisters grew up in Fair Lawn, New Jersey, where their Israeli parents had settled. Both hold American and Israeli citizenship. They learned about Israeli culture at home, through participation in the Israeli Scouts and yearly visits to their country. Issachar forged an especially strong connection to the Jewish state.

At the age of 16, she convinced her parents to move back to Israel so she could finish high school there and enlist in the army. She would have to repeat a year in school, but she wasn't deterred, said Goldberg, who stayed behind in the U.S.

"She really just wanted to move back to Israel. She's always been very Zionistic," Goldberg said.

In the army, Issachar served in combat and field intelligence. After completing her service, she traveled to India, where she discovered a new passion.

"She started really to fall in love with the culture, and yoga, and meditation," Goldberg said.

Issachar would return twice more to train to be a yoga teacher. Between visits, she worked as a waitress in Tel Aviv.

"Her favorite things are going to yoga, sitting on the beach and then going to the local coffee shop and drinking cappuccinos," Goldberg said. "She's a really simple person and enjoys the really small things in life."

Issachar spent her 26th birthday in Russian custody. She is allowed only one hour outside her cell a day, according to her sister.

"We have hope, because to let her continue sitting there isn't an option. It's just not an option," she said. "But we are really hoping it will come to an end soon because it's starting to take a toll on our whole family. We're not breaking, but I think we're close to it."