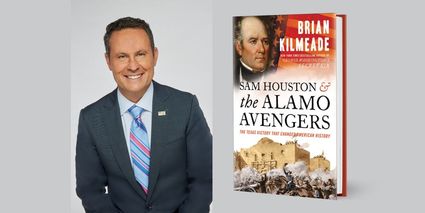 New York Times bestselling author Brian Kilmeade will be at the Roth Family Jewish Community Center of Greater Orlando on Saturday, Nov. 23 at 7 p.m. to talk about his newest book "Sam Houston and the Alamo Avengers."

In his now-trademark style, Kilmeade brings alive one of the most pivotal moments in American history, this time telling the heart-stopping story of the fight for Texas independence. While the events at the Alamo are familiar to most, fewer remember that, following that crushing loss, Sam Houston led a rag-tag army of volunteers to a stunning victory that paved the way for America's Westward expansion.

Kilmeade recounts in these pages how, on March 6, 1836, the Mexican army led by General Santa Anna massacred some 200 Texans who had been trapped in a former Spanish mission in San Antonio for 13 days. American legends Jim Bowie and David Crockett died there, along with other Americans who had moved to Texas looking for a fresh start. But the dramatic events at the Alamo are only act one in this extraordinary drama.

The defeat galvanized the surviving Texans and, commanded by General Houston, a maverick with a rocky past, a small army of settlers rallied to take on their much larger foe. But bloody battles in his own past had taught Houston patience and, in the face of angry men eager for immediate revenge, he convinced the Texans to do what they hated most: they retreated. The humiliating withdrawal would last six full weeks-until, finally, Houston and his underdog Texans turned to fight. Then they would exact a revenge at San Jacinto where, in 18 short minutes they won the independence for which so many had died.

"Sam Houston and the Alamo Avengers" recaptures the pivotal days in the future state of Texas that would change America forever. Kilmeade takes us from Gonzalez to Goliad and on to San Jacinto. He sheds light on the tight-rope the war hero walks between courage and calculation. Thanks to Kilmeade's storytelling, a new generation of readers will remember the Alamo and the lesser-known heroes who snatched victory from the jaws of defeat.