If you truly want peace, start listening to us Jews and Palestinians who live in the West Bank 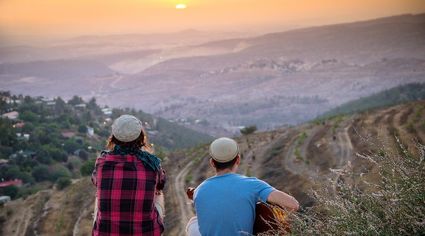 Two Jewish boys watching the sunset in the West Bank.

TEKOA, WEST BANK (JTA)-I have lived in Israel for 17 years, and I have lived in the Gush Etzion region of the West Bank the entire time. To much of the world, that makes me a settler who lives on illegally occupied land.

The international community considers all Israeli settlements to be illegal under international law-including East Jerusalem, the Golan Heights and the West Bank, known as Judea and Samaria to us Israelis. Some of these areas are places that Jews have lived for centuries or even thousands of years.

These also happen to be areas in which the Palestinians would like to build their future state. Though there has never before been a Palestinian state, many Arabs who refer to themselves as Palestinians live there-many more Arabs than Jews, each of us in our own separate towns and cities, almost exclusively Arab or Jewish.

The question of the settlements has been put back into the news with the recent announcement from Secretary of State Mike Pompeo that the United States will no longer consider Israeli Jewish settlements in the West Bank to be illegal.

But in truth, all of this talk of settlements are a distraction from what really matters: not the governments and their stalled peace process, but the people who live on the land.

I am a professional photographer and speaker. Much of my time is spent reaching out to Jews and non-Jews, left-wingers and right-wingers, religious and secular people, sharing a glimpse of Israel through my photography, speeches and articles.

One of my talks is about being an open-minded Jewish "settler" and my interactions with and support of all people, including Palestinians-a crowd-pleaser that truly crosses social lines. While I recently had one synagogue rescind their speaking invitation when they heard the word "settler," these stories are usually well received.

One of my favorite things to share is my experience taking a special photography class for Israeli and Palestinian women, run by the organization Roots. Prior to taking the class, it was hard for most of us to imagine interacting with each other in any way at all. In fact, my own friends were extremely concerned about my safety in taking the class. The Palestinian women were reluctant to attend at all.

But once in the class, suddenly, we were all just a bunch of women, smiling and posing for each other in the most natural of ways. It was refreshing, and truly encouraging.

Pundits are saying the United States' actions will doom peace efforts. I say that's nonsense. I'm not one to jump to defend anything automatically, but let's take a step back and look at things rationally.

From 1949 to 1967-when there were no settlements at all nor even a single Jew living in that region-the Arab countries were not interested in peace at all, or in a Palestinian state, for that matter. It was only when Israel acquired territory and started building communities in the land that it suddenly became an issue.

Peace efforts have failed miserably until now. The one thing Oslo accomplished is separating the Israeli and Palestinian people more than ever-geographically and ideologically-and generating animosity and renewed terror. President Trump didn't doom the peace process; it was already doomed.

If you truly support peace, it helps if you don't demonize settlers or Palestinians. We are both the ones closest to the conflict. Don't you think we want a solution?

Perhaps we can put the focus back where it belongs: On the people. Saying "the settlements are an obstacle to peace" is and always has been a bogus excuse for terror attacks from extremists operating out of the West Bank and Gaza.

But being open to real conversations from real people-settlers and Palestinians-can be eye-opening and informative. Perhaps even a bit surprising. Maybe now, we can all roll up our sleeves and get some actual work done.