The Rosen JCC has big plans for its future 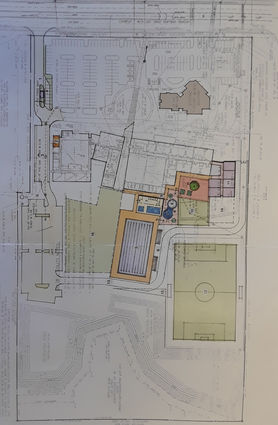 On Oct. 24, the Rosen JCC celebrated 10 years in Southwest Orlando with its "10th Anniversary: Building the Future" event. Harris Rosen was honored with the JCC's inaugural Community Builder award for all he has done and continues to do for the Southwest Orlando community. Following the presentation, Dr. Reuben Romirowsky, Rosen JCC CEO, shared the J's vision for the future, unveiling an architectural rendering of their plans.

Instead of a nameplate on his desk, there is a slogan that says "Don't wait until tomorrow to be extraordinary today." Settling in only 10 months ago from Teaneck, N.J., Romirowsky-known to everyone at the JCC simply as Reuben-is definitely extraordinary. He embarked almost immediately on a strategic planning process to "re-imagine" what the JCC should be in three years: A Town Square that can and will meet needs for many in the community (not limited to the Jewish community). Its slogan is "Better Together," and Romirowsky is enthusiastic to share his vision.

Just to recap the history of the Rosen JCC, it began in 1994 as a satellite branch of the Jewish Community Center of Greater Orlando, headquartered in Maitland, Fla. By 2005, the JCC presence was housed at the Southwest Orlando Jewish Congregation. A program director oversaw the daily activities of the Early Childhood Learning Center, which had about 100 children enrolled. Then in 2009, Orlando hotelier and philanthropist Harris Rosen contributed $5.1 million to develop a state-of-the-art community center adjacent to the synagogue.

In 2015, after five years of growth, The Jack & Lee Rosen Jewish Community Center was incorporated as an independent organization. The following year, with the assistance of additional donations from Harris Rosen and The Harris Rosen Foundation, the facility added a $3.7 million multipurpose theater to serve its growing needs.

Romirowsky now is looking at least three years into the future. He has met with area residents, businesses and stakeholders in the community. His take-away is that the Southwest Orlando community has a hunger for tangible programs and services that can equip them with the tools needed to navigate their everyday challenges.

"Our newly-launched 'Town Square' concept envisions an array of new programs and service offerings, thereby creating an investment culture at the JCC which is far more powerful than a transactional culture that traditional membership is often associated with," he stated.

Romirowsky also noted that Orlando is growing three times the national average, with 1500 people arriving each week. Although Southwest Orlando hosts about 72 million tourists every year, a substantial amount of families are settling here. "We need to be ready for them," he said.

Romirowsky also recognized that many families are looking for connection. "They see community as filling that need-that connective tissue that fills the gaps that the family of the past often provided."

Romirowsky sees the center as a mirror of the community-a diverse and inclusive center where people of all faiths and culture will feel comfortable.

"We want the JCC to be the central portal for our local neighborhoods and schools, so that our campus resources are experienced as benefitting the community, and not just our membership," he shared.

The new footprint will include a splash pad, a teaching pool as part of the early childhood learning center curriculum. An Olympic-sized pool that is planned, may be shared with the high school that is to be built across the street from the center to use for after-school programming.

"Each of these elements will create synergies between our partners, drive new revenue streams, and build a greater sense of community," he stated.

"Because our families currently are so disproportionally young, we need to extend our program reach to the complete family life cycle, to serve all ages. That's why we are interested in collaborating with UCF Hillel. We have to make the case for people to stay in Orlando once they graduate college," he explained.

On the other end of the spectrum, Romirowsky hopes to work with Kinneret and reach out to older adults who are independent and eager for stimulation, who want to give back to the community.

Romirowsky also realizes that there are many services that are not available in Southwest Orlando such as special needs services, family and mental health counseling, programs for teen achievement, caregiving for families coping with chronic conditions, and integrating fitness with nutrition and wellness.

"Having these resources on our campus will then activate a volunteer culture, worthy of people's time and investment."

The foundation of the Rosen JCC strategic plan is to secure the right nonprofit and business partners who are mission-aligned with the JCC.

"Our search for quality partners who share our future vision is already underway," Romirowsky said. Share the Care, Jewish Family Services and Orlando Repertory Theater have partnered with the Center.

Romirowsky is more than qualified to meet these vision demands. He is an accomplished executive with more than 30 years of experience developing strong financial support in Jewish community organizations.

"We need to grow-not just for the sake of being bigger, but because there is so much more to do!" Romirowsky enthusiastically proclaimed. "It's been said that there is no power for change greater than a community discovering what it cares about."

If you are interested in learning more about the Rosen JCC plans or would like to discuss a partnership with the Center, contact Dr. Romirowsky at