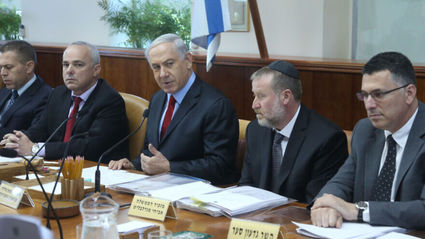 Former minister Gideon Sa'ar has called for the party to a primary for party chairman within the next two weeks in order to enable a new party leader an opportunity to form a government without taking the country into a third election. The Knesset is currently in an unprecedented 21-day period in which any member may attempt to form a majority government.

Sa'ar has criticized Netanyahu for labeling the indictments as "an attempted coup," while expressing confidence that he would be able form a unity government where Netanyahu has failed.

Likud Knesset member Michal Shir, who supports Sa'ar's bid for the party leadership, told JNS that many within the Likud favor a snap primary. "I am not the only one in Likud who believes that the party needs a new leader at this time and that Netanyahu needs to focus on his legal issues," said Shir.

Yet many within the party are still placing their support firmly behind Netanyahu's continued leadership. Likud Tourism Minister Yariv Levin told JNS that "primaries for chairman of the party at this time would hurt the party."

The Likud Party has had just four chairmen since its founding, all of whom served as prime minister, and is one of a select few parties that continuously holds democratic primaries for its chairman and Knesset slate.

"The Labor Party changes party leaders all the time and look at where they are-celebrating winning six seats in the last election," said Levin. "Changing our leader because there are some difficulties and challenges will lead our party in that direction."

Netanyahu himself had floated the idea of a party primary several weeks back to re-secure his mandate to lead the party despite ongoing legal woes. Meanwhile, Netanyahu is believed to support holding a primary, although not within the two-week window suggested by Sa'ar.

Head of the Likud Central Committee Haim Katz has tentatively agreed to hold primaries in approximately six weeks, after the 21-day window to form a government expires and after the Knesset disperses to prepare for third elections in less than a year.

A chance to 'prove his innocence'

Meanwhile, former Jerusalem mayor and current Likud Knesset member Nir Barkat has suggested a plan for the party to hold elections for a "deputy leader," who would automatically assume the "most senior post in the government or the Knesset after the chairman of the party" and take over the premiership should the prime minister be removed from office.

Such a plan enables the party to continue to back Netanyahu while simultaneously presenting a secondary party leader.

In a statement, Barkat said: "I would like to offer my support to prime minister and Likud chairman Benjamin Netanyahu, and wish us all a fair trial, which will prove his innocence, and allow him to continue to lead the State of Israel with great success, as he has done so far, for many more years."

He announced that "We must stand alongside the prime minister who is a great asset to the country and to the Likud, to enable him to prove his innocence... and remember the many public figures who were found innocent in court."