In PA-controlled Bethlehem, Christmas is no longer the celebration of yesteryear 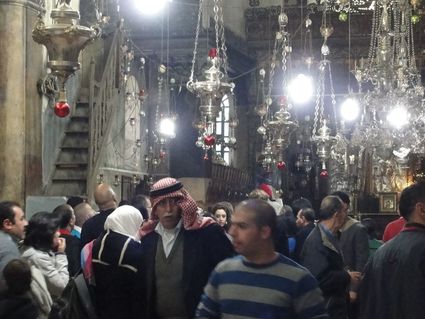 The Church of the Nativity in Bethlehem, Israel, on Christmas Eve 2019.

(JNS)-On the afternoon of Christmas Eve, Manger Square in Bethlehem was filled with people, but local Christians were few and far between. The majority of those milling around in the sunshine appeared to be local Muslims, along with a smattering of tourists.

In previous years, visitors waiting to step into the tiny opening of the Church of the Nativity could expect to stand in line for up to an hour. This year, despite the completion of a four-year, $18 million restoration project at the church, the line was short; most of those in the square were more interested in snapping selfies in front of the 55-foot Christmas tree and perusing the numerous street food stalls dotted around the square.

Also in contrast to previous years, there was a lack of tension in the air at the square this year. The faces of the locals reflected a certain resignation.

Crowds gathered to watch the traditional, colorful and noisy parade of uniformed Palestinian scouts as they marched through town with drums and bagpipes. But once the parade was over the crowds thinned under the watchful eyes of scores of heavily armed Palestinian police and Palestinian Authority security forces, who closed off streets and directed traffic.

On one side street, the green iron doors of the Palestinian Bible Society Christian Cultural Center were locked tight. A few yards up the street, the doors of St. Mary's Syrian Orthodox Church were open, but the church was empty. The Orthodox Christmas is celebrated on January 6.

Peter, the lone church official present, was dusting the empty benches of the ornate church, built in the 1920s. He was happy to show a visitor the hand-written Aramaic bible used by the Syriac parishioners.

Slightly different views were expressed by members of the Gattas family, Greek Orthodox Christians who own a sophisticated women's clothing store directly across from the Evangelical Lutheran Christmas Church on Pope Paul VI Street, where foot traffic was very thin on Christmas Eve.

George Gattas, 42, told JNS the store has been in their family for more than 50 years, with his father originally using the space as an electrical supplies shop.

"There's no good employment here for people," said George. "Business last year was better. The tourists only benefit the hotels, not local businesses," he added. Without elaborating, Gattas's sister noted simply that "the politics are not so good right now. Most young people are leaving or want to leave."

Signs on the door of the Evangelical Lutheran Christmas Church invited people to English-language Christmas Eve vespers and a Christmas Eve service, as well as an Arabic Christmas Day morning service.

Prominently on display in the foyer of the church was the 2019 "Christmas Alert" booklet produced by the Kairos Palestine project, which advocates for BDS. The church's pastor, Dr. Munther Isaac, is an active Kairos board member. Much of the booklet is dedicated to decrying the Trump administration's as-yet unrevealed Mideast peace plan, also known as the "deal of the century."

This year, Israel's Tourism Ministry provided round-trip shuttle service for the short journey between central Jerusalem and Bethlehem. Most of those taking advantage of the free service were curious European tourists, but there was also a smattering of American Christians staying in Jerusalem.

Three members of the Carter family from Huntsville, Alabama, were surprised to discover that the southern boundary of Jerusalem is just a few hundred yards from Bethlehem. Others on the bus expressed astonishment at the ease of passage over the Rachel's Crossing checkpoint between Israel and Area A, the Bethlehem area largely under P.A. control. Neither Israeli nor P.A. security personnel checked travel documents in either direction.

Gunther Shtas and his wife, Eva, tourists from Hamburg, told JNS they had no idea Bethlehem was no longer under Israeli control or that they would be crossing a checkpoint.

For many visitors to Manger Square in 2019 it's hard to understand that Bethlehem was the source of many terror attacks against Israeli civilians after Israel handed the town over to Palestinian rule a few days before Christmas 1995, in compliance with the 1993 Oslo Accords.

The transfer of power occurred despite the pleas of the city's Christian mayor, Elias Freij, who urged Israel to refrain from handing over the town to the P.A. because he was concerned about the fate of its Christians.

On Christmas Day that year, P.A. head Yasser Arafat raised the Palestinian flag over Manger Square and addressed thousands from a rooftop in view of the Church of the Nativity. In the 24 years since, the Christian population of the area has dwindled to less than 20 percent, according to most estimates.

Few outside the Christians of Bethlehem remember the month-long April 2002 takeover of the Church of the Nativity by 13 heavily armed Palestinian extremists, orchestrated by Yasser Arafat.

A prominent poster at the Bethlehem Police station at the edge of Manger Square featuring Arafat's smiling face, together with that of current P.A. leader Mahmoud Abbas, provides a not-so-subtle reminder of who is still in charge.