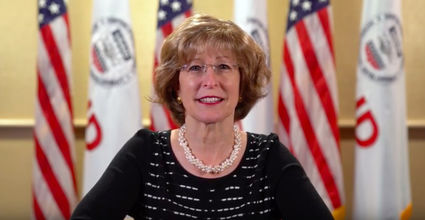 (JNS)-Deputy Administrator at the U.S. Agency for International Development Bonnie Glick made headlines last week after Bloomberg reported that she placed a hold on U.S. economic assistance to Lebanon-a story that she denies.

"There was no hold on assistance to Lebanon," she told JNS. "We have a large assistance program in Lebanon that is robust and ongoing."

She added, "I am absolutely concerned that there be no spillover of U.S. government assistance to benefit directly or indirectly Hezbollah, which is a terrorist organization," according to the government of the United States.

Earlier this year, Kosovo, the United Kingdom, Argentina and Paraguay designated Hezbollah, an Iran proxy, as a terrorist group.

JNS talked with Glick by phone on Dec. 16. The interview has been edited for brevity and clarity.

Q: As one of the Jewish members of the administration, could you describe your background?

A: I grew up in Chicago on the South Side in Hyde Park and went to a small Jewish day school called Akiba Schechter Jewish Day School through eighth grade. From there, I went to a public high school. When I went to college, I was very involved in Hillel at Cornell University and was also involved in the student struggle for Soviet Jewry. I went to graduate school and joined the U.S. Foreign Service in the State Department and married my husband, who was also a Foreign Service officer. We came back to the United States from Ethiopia and Nicaragua, and started our family and decided that we were interested in the United States so that our kids would be closer to their parents.

When I was in Ethiopia, I was involved in "Operation Solomon," which was the airlift of 14,325 Ethiopian Jews to Israel in 36 hours by the Israeli military.

Q: How does your Jewish background impact your work?

A: When you think about Judaism and 613 mitzvot, I think we pretty much do all 613 here at USAID every day. The focus of our work is helping countries on their journey to self-reliance.

Sometimes, countries need help in the development areas like in education, water, sanitation and hygiene. Sometimes, they need help recovering from a disaster, whether that's a hurricane or an earthquake or in a case, like in the Democratic Republic of the Congo, they need to recover from a pandemic like Ebola. Or in the case of a country like Venezuela, they need help recovering from a socialist dictatorship that has ruined the country to the point where there is not a single functioning X-ray in all of Venezuela.

Q: You recently were in Hungary. What did you do there as it pertains to anti-Semitism? What role does USAID have in combatting Jew-hatred?

A: One of the key areas where USAID works is in promoting freedom around the world. The very focus of the United States is freedom of speech, freedom of religion, freedom to gather in groups.

In Hungary, the government sponsored the International Conference on Christian Persecution, which is sort of a misnomer. It's the counter-persecution of Christians. The Hungarian government has taken seriously there are Christian communities around the world that are under really direct threat from either the governments of the countries in which they live or from rogue elements within those countries. The Hungarians asked me to come because we are partners with the Hungarian government's aid arm in northern Iraq called "Hungary Helps." They had been solely focused with helping the community of Christians that was really devastated by ISIS. They've expanded their focus to help the Yazidis, who were even more brutally devastated by ISIS.

Hungary is able to do certain things that we in the United States are not able to do. They specifically go in and build churches, whereas USAID doesn't rebuild religious buildings. But USAID can help with community development around those churches in the case of northern Iraq. Help those communities re-establish themselves and allow people who either fled as refugees or were internally displaced in Iraq to return to their homes and to their communities.

At the conference, I not only talked about the persecution of Christians in northern Iraq or in northern Nigeria, but really to talk about the importance of protecting all religious and ethnic minorities because from our perspective, a country cannot be truly democratic if it does not stand up for the rights of people who are not like the majority. Like Burma, where they've ethnically cleansed the Rohingya, or China, where Uighur Muslims are really tormented by the Chinese with over a million of the Uighur currently in labor camps that we have very little visibility into as the international community. From the information we have from those who've escaped the camps, and from the information we gather from Rohingya Muslims who are living in basically concentration camps in Burma, we learn about terrible treatment of Muslim minorities in those countries. For us, it's not enough to say we're protecting vulnerable Christians, but we're protecting vulnerable religious and ethnic minorities.

We see it here in the United States as well, most recently, in Jersey City with the brutal murder of Jews in a kosher grocery store. It's important that we attribute to Americans the line that the price of liberty is eternal vigilance, though [Holocaust survivor and Nobel Prize laureate] Elie Wiesel said that "the opposite of love is not hate. It's indifference."

What we're seeing in the world in terms of its approach to anti-Semitism is a level of indifference that we haven't seen in a generation.

In the United States, you have people within the administration who are keenly aware of what it is like to live with anti-Semitism. The president signed an executive order on Title VI of the 1964 Civil Rights Act that will make it very difficult for universities around the country to adhere to what a lot of students are advocating, which is supporting the BDS movement. Colleges and universities [could] lose federal funding if they sign onto BDS.

Q: U.S. President Donald Trump has been vocal about focusing on "America First" and withdrawing from costly engagements abroad. Has this led to any impact on USAID programing?

A: Our USAID logo tells the entire story, which goes along with the administration's mantra of "America First." The logo is two hands interlocked and it says, "USAID: From the American People." Development assistance is a critical component of our national security strategy. For us to disconnect from the world in terms of offering development assistance to countries along their journey to self-reliance would be to take a step back. What development assistance provides are jobs not only in developing countries, but in the United States.

By engaging with the private sector, we bridge the gap between the private sector and the public sector. We talk about how aid beneficiaries for education and sanitation are customers of American clients who send their technology and development overseas.

Q: What has the impact been on USAID ceasing its operations in the West Bank and Gaza earlier this year?

A: Earlier this year, at the request of the Palestinian Authority, the United States ceased providing any assistance in the West Bank and Gaza under the Anti-Terrorism Clarification Act. The programming is not continuing. Where possible, we will work with Congress to reprogram funding that was intended for these programs to high-priority projects elsewhere in the world.