Jews in the Land of Disney 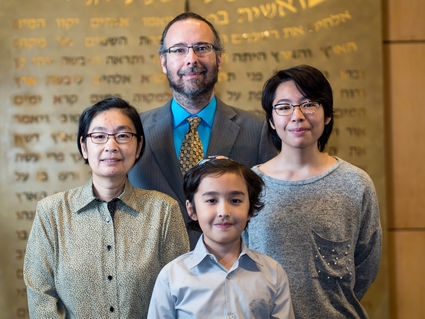 "The past is never dead. It's not even past."-William Faulkner

"My passion is teaching," Rabbi Joshua Neely told me as we talked about why he chose his career path. "Becoming a rabbi for me seemed to be a logical choice. I've always been very inquisitive. Still am. At a young age, eight, nine years old, I was asking questions about life and Judaism. I've always been this way," Neely said. "Perhaps, my mother's questioning nature... led us to this point. In this regard, I'm very much like her," he shared, adding, "You may be surprised that my mother was raised in a nominally Christian environment."

Neely's mother, Charlene Neely, began her spiritual journey at a young age. Seeking answers, she went to different places of worship with her friends, but when she went to a synagogue for the first time, she felt at home. In the late 1950s, at the age of 15, she began the process of conversion.

She was active in Hadassah and visited and led trips to Israel. In 1967, when she was 21, she volunteered to go to Israel to help any way she could during the Six-Day War.

"Israeli youth were conscripted into the military, so the Jewish volunteers from around the world filled the various jobs that were abandoned on the civilian side when the Israeli citizens were called to defend the Jewish State. I grew up seeing my Judaism and the State of Israel as precious gifts never to be taken for granted. They were not 'given' but chosen and defended passionately," Neely stated.

When Neely was young, Charlene landed a job as the co-director of a Reform religious school.

"Growing up, my brother and I spent a lot of time there because of her work. As I grew older, I had questions that I remember asking the Reform rabbi. I wasn't very satisfied with the answers I received, even at that young age. Some things just didn't make sense to me."

Then when Neely was 15 Charlene became the executive director at a conservative school in San Diego.

"When we entered this realm," Neely shared, "those questions I was still seeking answers too, were finally answered. Conservative Judaism made more sense to me. It was as if a light bulb went off, it clicked!"

This began Neely's progression little by little toward a more observant and knowledgeable practice of Judaism, which took years to fully take on.

As his mother researched the family's genealogy, she found things that opened her eyes.

"There were patterns she saw, and obvious clues like many Jewish surnames and first names. This was the beginning of a quest to research and learn about our family's past. It was a pivotal moment in our lives."

Charlene was persistent enough to go back 1,000 years. She found out that they were direct descendants of Rashi, the medieval French rabbi and author of a comprehensive commentary on the Talmud and the Tanakh.

Neely's great-grandmother, Mary Teresa Gallegos, moved as an infant from San Marcial, New Mexico, to Los Angeles in 1923. She was a practicing Catholic, however, she had strange traditions-such as lighting candles on Friday evening, and extended family members never ate pork.

One of the most startling findings was that 19 generations ago, their family was directly linked to Solomon ha-Levi, a rabbi who lived in Burgos, Spain, in the 14th century. This rabbi offered to convert to Catholicism, bartering the Jews in his town, and his family's Jewish souls to the Catholic Church. In return for the mass conversions, he was brought into the Catholic Church as a bishop. Neely said, "I guess he would be equivalent to an uncle, 19 generations removed. His decision trapped the rest of the family and countless others into living double lives. It pushed their Judaism underground, where it remained until we brought it back."

Neely attended undergraduate school at the University of the Pacific in Stockton, California. He received his undergraduate degrees in philosophy and political science, which fed his life-long curiosity about how the world worked. He considered going into academia and went to graduate school at San Diego State University. He soon dropped out. "I was disillusioned when I saw that the more I advanced in my studies, the narrower the subject matter became. It seemed fewer and fewer people would care or be impacted by what I was doing."

Like so many others, Neely had a tremendous amount of student debt and was looking for a way to pay it off while figuring out what his next step would be.

"A friend of mine from college was living in Japan and told me about a job teaching English. It was a 'full immersion' school, which meant that once a student began, they could not speak Japanese. Imagine that I had to communicate to my students only in English. It was challenging."

He moved to Tokyo, and worked for Nova, the largest language school in Japan at the time. "I worked at the Ginza branch, which is like the 5th Avenue of Tokyo. My average class was comprised of three to four students. Sessions were only 40 minutes and on an average day I had eight classes." This frantic schedule and changing students gave him many opportunities to hone his teaching abilities.

After a trip to Israel while in college, Neely had begun wearing a kippah all the time. He wanted to project his pride in Judaism, not shying away from it. Because of this, he received a lot of questions from his Japanese students who had little exposure to or knowledge of Judaism. Most were curious about what the kippah was and why he wore it. This was followed by questions like, 'What is a Jew?' 'How could you be Jewish and an American?' 'Why did Hitler hate you?' He felt that he was responsible for answering to the best of his ability, but he knew that he was doing it for his own clarification as well. This was the impetus for him to dive in deeper, to understanding his faith. "We didn't have the Internet really back then, so most of my studies were from the few books I had brought or could buy in Tokyo."

He met his wife, Penelope, in Japan. She had come from England and also was a teacher in the program. They hung out together with others in their circle of friends. "There was a point where we became more than friends. About a year after I had arrived in Japan, we fell in love."

Penelope went through the conversion process in Tokyo. The Conservative rabbi at the JCC taught her and he performed the conversion ceremony at their mikveh.

At the same time as he was considering marriage, Neely was also considering becoming a rabbi. "Japan had forced me to take full, personal responsibility for my Judaism. I couldn't rely on my family or a close synagogue to do the hard work for me. It also showed me just how much I loved teaching, especially about Judaism."

He was accepted into the Ziegler School of Rabbinic Studies in Los Angeles, which he said was perfect for him because after being away in Japan for four years he wanted to stay close to his family.

While waiting to enroll for the next year's admissions, Neely and Penelope were married. He taught English in San Diego and Penelope worked for a local Jewish newspaper.

Their first child, Hannah, was born while he was in his second year of rabbinic school. Ziegler was a five-year program and in the third year all students had to study in Israel. "I went to Machon Schechter in 2003-2004. It was a wonderful experience living in Israel and studying with Israelis as well as other Americans. Though being a new father in a new country was quite a handful."

When he was ordained in 2006, he took a job in Baltimore, Maryland, working as an assistant rabbi in a large Conservative congregation. He was there for four years, then the country entered a recession and his position was eliminated.

He interviewed for the rabbi's position at Temple Israel in Winter Springs, where he saw a unique opportunity. "It was an established synagogue recovering from an implosion. I met the people who were literally fighting to keep the congregation alive. I was impressed with their dedication and determination to pick themselves up and to will the congregation forward. Every year here has shown me that I had made the right choice."

As co-director of the school and bar mitzvah trainer, he is very involved with the children at Temple Israel. "I love the idea of a Jewish school which has a vibrant program that brings together students from three different synagogues [Temple Israel, Temple Shir Shalom and Congregation Beth Am]. Working with the kids is amazing. Just like I was, they are always ready to ask the hard questions about things that matter."

Temple Israel has a diverse congregation and one that continues to attract new members of all kind. They have a full set of learning opportunities for all ages and a strong conversion course.

"Whenever I teach, work with the kids, welcome someone new, I think back to my ancestor 19 generations ago. He bartered our Judaism during the time of the Spanish Inquisition for his personal gain. Maybe he thought it was the only way to protect the people he cared about. Whatever his intentions, I'm proud to say, we're still here, 500 years later, growing stronger, standing tall and proud. My mother and I are a living example of how our past affects us even today. Our Jewish story continues as we're back in the land of Israel and my family is back on course. If you look carefully, every family has a story like this. The courageous decisions, the bad choices, the struggles and the successes-every family is a tapestry. The big question is what you will do with your thread?"