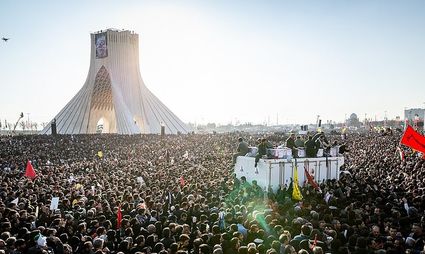 (JNS)-The wave of Iranian ballistic missiles that struck two military bases in Iraq early on Wednesday that house U.S. personnel was a clear Iranian attempt to conclude the current phase of escalation with Washington.

The missiles failed, intentionally or not, to cause any casualties, after days of warnings by Iranian officials saying that U.S. military targets would be hit-possibly an early warning designed to decrease the chance of victims when the strikes actually came.

Still, they were an exhibit of accurate Iranian firepower. Iran's military industry is mass-producing guided ballistic and cruise missiles, and the attacks were a reminder of Iran's mounting accurate firepower-used, for the first time and openly, against American targets in the region.

The missile attacks represent a highly calculated move by the Islamic Republic, designed to save face after being knocked back hard by the surprise American airstrike assassination of Quds Force Maj. Gen. Qassem Soleimani on Jan. 3 in Baghdad.

Despite the fiery rhetoric, the Iranian regime's leadership-Supreme Leader Ayatollah Ali Khamenei, the Supreme National Security Council and the Islamic Republican Guards Corps' senior command-is capable of a rational cost-benefit analysis. Iran is perfectly aware that comparing its conventional firepower with that of the United States is an almost childish exercise.

Iranian decision-makers have no interest in encountering Tomahawk cruise missiles or B52 bombing raids on military bases and strategic sites in Iranian cities. Tehran understands that it miscalculated in recent weeks, pushed too hard and misread the Trump administration, particularly when it ordered its militia to launch a deadly rocket attack on a U.S. base and ordered mobs to storm the U.S. embassy in Baghdad.

Despite the apparent de-escalation, the risk of war is far from passing. The Iranians remain on a collision course with the United States in Iraq, but they are likely seeking a return to their comfort zone: proxy operations, outsourced to the Shi'ite militias in Iraq, or plausible deniability attacks on American troops in the future.

Its goal, however, remains unaltered: to eject the Americans from Iraq and complete its takeover of that country, as part of a wider scheme to destabilize the region and move towards violent hegemony. The regime calls this vision "exporting the revolution." This is a plan that includes the goal of surrounding Israel with heavily armed terror armies. Soleimani was instrumental in trying to achieve this dangerous vision.

He also demonstrated that proxy warfare is the least risky way to proceed for achieving Iran's radical strategy. Building a network of armed forces and nourishing them with increasingly advanced weapons, cash and orders was his modus operandi.

As the London-based International Institute for Strategic Studied noted in its recent report, "By 2019, Iran's influence in Iraq, Lebanon, Syria and Yemen had become a new normal in a region where such a concept would have once been unthinkable by the region's leaders, including those in Tehran. Iran had achieved much of this change using a transnational Shia militancy, capable of fighting with varying degrees of skill and discipline, which confronted different Iranian adversaries on disconnected battlefields simultaneously."

"There is one important issue: What is our role?" asked Iranian Supreme Leader Ayatollah Ali Khamenei, after chants of "Death to America!" and "Death to Israel!" died down among the regime-organized audience.

Iranian television broadcast his speech on Wednesday, and it was translated by the Middle East Media Research Institute.

"After all," Khamenei said, "something important has happened." The United States received a "slap last night," he said, referring to the missile attacks. "As a response, such military operations are not enough. What's important is that America's corrupting presence in the region must come to an end."

The audience erupted in chants of "Allah Huakbar!" The broadcast is a regime propaganda message, but one that contains real information about Tehran's intentions moving forward.

The same message is echoing among members of the Iranian-Shi'ite radical camp throughout the Middle East. U.S. soldiers and officers will return home in coffins, threatened Hezbollah chief Hassan Nasrallah during a speech in Beirut a few days after Soleimani's assassination.

Iranian President Hassan Rouhani tweeted on Wednesday that "our final answer to his [Soleimani] assassination will be to kick all U.S. forces out of the region."

Iran is signaling its intent to revert to asymmetrical combat tactics in the future via its network of proxies. It can also be expected to politically pressure the barely functioning Iraqi government to end all cooperation with the Americans.

The Popular Mobilization Front is an umbrella of Shi'ite militias in Iraq, representing tens of thousands of armed members, and is dominated by organizations that are funded, trained and equipped by Iran. These include Kataib Hezbollah, whose leader, Abu Mahdi Al-Mandis, was killed alongside Soleimani in the American strike.

Kataib Hezbollah, as well as other groups like Kataib Sayid al-Shuhada and Asa'ib Ahl al-Haq, are essentially Iranian attack pieces that can be activated at any time against America. Iraqi Shi'ite paramilitaries are also active in Syria, where they have been part of Iran's attempt to entrench itself and prepare attack bases against Israel.

As the United States Military Academy at West Point's Combating Terrorism Center said in a recent report, such groups "are growing in economic and political power and are attacking foreign entities on Iran's behalf." They have encountered growing resistance from Iraqi civilians fed up with their government's failures and Iran's meddling. But they remain present and powerful.

Their presence represents a deep infiltration of Iraq by the Islamic Revolutionary Guards Corps. So while Iran may have taken a step back from the brink with the Trump administration for now-opting for the patient game of continuing to build up its network of terror armies and political influence-the Iranian takeover plan remains in place.

As a result, the situation in the region will remain highly explosive, with the smallest tactical incidents being able to snowball into general war-whether any side wants it or not.

Israel has not been a part of this latest escalation, but remains on high alert. The same Iranian-Shi'ite bloc in the region poses the most severe threat to its security from multiple directions.

The challenges facing the Jewish state are not decreasing, Israeli Prime Minister Netanyahu stated on Wednesday, adding that those who seek to attack Israel will absorb a crushing counterstrike, he warned.

Blue and White Party leader and former IDF Chief of Staff Benny Gantz offered a similar warning, saying, "The Iranian attack on American bases again proves that Iran is a threat to world peace and Middle Eastern stability. The IDF is the most powerful military in the region, and I would not recommend for anyone to drag us into an incident that is not tied to us, and to test us."

If such a provocation did occur, he said, "I am convinced that the response will be powerful, severe and unequivocal."