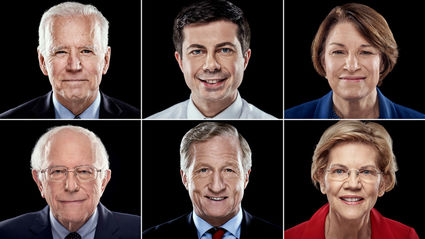 (JNS)-In the seventh and final Democratic debate before the Iowa Caucus on Feb. 3, hosted on Tuesday by CNN and The Des Moines Register at Drake University in Des Moines, Iowa, the six candidates on stage slammed U.S. President Donald Trump's Middle East policies, especially regarding the Iranian threat.

"We're in a situation where our allies in Europe are making a comparison between the United States and Iran, saying both ought to stand down, making a moral equivalence. We have lost our standing in the region. We have lost the support of our allies," said former U.S. Vice President Joe Biden. "The next president has to be able to pull those folks back together, re-establish our alliances and insist that Iran go back into the agreement, which I believe with the pressure applied as we put on before, we can get done."

Sen. Amy Klobuchar (D-Minn.) warned that amid the increasing tension between the United States and Iran, "Donald Trump is taking us pell-mell towards another war."

Tensions between the United States and Iran have increased since the Trump administration withdrew from the 2015 nuclear deal in May 2018, reimposing sanctions lifted under it, along with enacting new financial penalties in what Washington has called a "maximum pressure" campaign against Tehran.

Pete Buttigieg, the former mayor of South Bend, Ind., and the only candidate on stage who served in the U.S. military, said the United States "can continue to remain engaged without having an endless commitment of ground troops."

The debate then turned to whether or not Iran should be allowed to have a nuclear weapon.

Although he criticized Trump for withdrawing from the 2015 nuclear agreement, Buttigieg said that "ensuring that Iran does not develop nuclear weapons will, of course, be a priority, because it's such an important part of keeping America safe."

"But unfortunately, President Trump has made it much harder for the next president to achieve that goal," he continued. "By gutting the Iran nuclear deal-one that, by the way, the Trump administration itself admitted was working, certified that it was preventing progress towards a nuclear Iran-by gutting that, they have made the region more dangerous and set off the chain of events that we are now dealing with as it escalates even closer to the brink of outright war."

Klobuchar, who called Iran "a terrorist regime," said she would restart negotiations to get America back into the 2015 nuclear agreement that would include improving its sunset clauses.

"You have to have a president that sees this as a number one goal... and then you have to get an agreement in place," she said.

The candidates called for Congress to use its authority to either approve or reject the use of U.S. military force as it pertains to Iran. The Authorization for the Use of Military Force from 2001 has been subject to debate since the U.S. killing of Iranian Gen. Qassem Soleimani on Jan. 3 at Baghdad International Airport.

The Democratic candidates previously slammed the decision to eliminate Soleimani.

Additional topics discussed during Tuesday's debate included other foreign-policy issues such as North Korea, as well as trade, health care, education and a CNN report on Monday that Sanders told Warren in 2018 a woman can't win the White House.

"I was pleased to see Iran was the first issue to be discussed. This shows that foreign policy will be a crucial issue in November," David Adelman, an Iowa Democratic political consultant for state and federal clients who was at the debate, told JNS. "Also it was very telling to see certain candidates say they would remove troops from the Middle East and others understand the disastrous impact this move would cause."

However, continued Adelman, "I was disappointed the moderators did not ask the candidates about their plan to combat anti-Semitism."

The Greater New York area has experienced a spate of anti-Semitic attacks, including a Dec. 28 machete attack that injured five people at a home and prayer hall in Monsey, N.Y.

"The candidates on tonight's debate stage expressed a promising vision for the future, including strengthening our national security with principled leadership," Jewish Democratic Council of America executive director Halie Soifer told JNS. "The Democratic presidential candidates may differ on some issues, but they are united in their desire for a foreign policy that begins with restoring our alliances, returning to diplomacy and only deploying the power of the U.S. military in times of need."

"The candidates agreed that President Trump's reckless and irresponsible foreign policy, including his withdrawal from the Iran nuclear deal, has put our national security at risk," she continued. "The American people agree with this view, and a majority of Americans believe that the Soleimani strike has made us less safe."