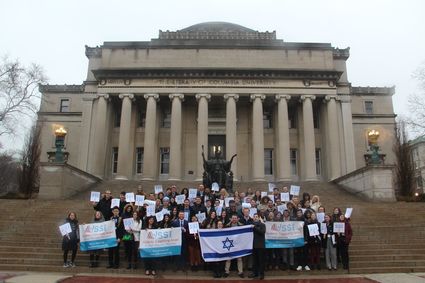 Pro-Israel students from 30 university campuses across the United States and Canada gathered at Columbia University in New York City for the Students Supporting Israel conference.

(JNS)-Pro-Israel students from 30 university campuses across the United States and Canada gathered last week in New York City for a three-day conference to learn about defending Israel effectively, confidently and unapologetically at their schools.

The conference was hosted by Student Supporting Israel, a nonpartisan, non-Jewish campus group, and took place at Columbia University, which has been called one of the most hostile colleges for pro-Israel students.

"That was why it was important for us to host our conference here," explained SSI co-founder Ilan Sinelnikov. "The most hostile place? That's where SSI will go because our activists should be able to take on any opponent, at any campus, at any time of the year. That is basically our motto at SSI."

Gathered at the conference were 90 Jewish and non-Jewish pro-students from a wide range of backgrounds, including South American, Bangladeshi and South Korean. Some the activities and discussions they participated in included a mock student government lobby so participants could practice their pro-Israel arguments; hearing from SSI leaders about their experiences advocating for Israel support on campuses; asking questions to Consul General of Israel in New York Dani Dayan; practicing in a group activity how to respond to challenging questions about Israel; and they were given tips about combating BDS on campus and drafting pro-Israeli legislation.

"I'm immensely grateful to be here and to be able to experience being around so many other people who are like-minded, and have so much passion for Zionism in a really authentic and original way that's individual to everyone here," said Arianna Sadikov, 20, a Jewish sophomore at California's Santa Monica College.

She explained that she became religious about a year ago, and that's when she really started noticing the misinformation on campus about Israel. She saw the growing hostility of members of the Students for Justice in Palestine (SJP) chapter at her school, and how they sometimes approach SSI members that their tabling events, yelling quotes from the Koran, saying Jews must die or screaming at them in Arabic.

At the same time, Sadikov feels that pro-Israel students not doing enough to make sure people know the truth about Israel and Zionism.

"I think it's important to continue focusing on promoting an accurate narrative about Zionism that doesn't leave out any part of the story," she said, adding that the lack of detail information to combat BDS was stressed during the conference, and that Jewish students seemed to leave more empowered and with more tools to tackle the problem.

After Sadikov, who was one of the presenters, left the stage, "I had a lot of people came up to me asking what can I do to be able to share more accurate information about the narrative of the Diaspora and all of us as Zionists. And I think that was something that was really amazing to me-to see how everyone here is so interested and adamant about making sure that they are giving everyone the correct information. And they're willing to learn and collaborate, and it's so amazing to be here."

'More tools in your tool kit'

For Dimas Guaico, a Latino junior at Bob Jones University in South Carolina who is not Jewish, his passion is to share with the Latino community Israel's many contributions to the world-historically, technologically, religiously-and to bridge SSI with the Christian college community in the United States. At the SSI conference, he connected with other pro-Israel students and traded ideas with them about how to combat anti-Semitism and misconceptions about Israel at their respective campuses.

"I like how much SSI uses the passion of the actual students to move them," the 23-year-old told JNS. "There's no special incentive that they give to students; it's just using the passion that students already have to kind of drive them towards more advocacy on campus. As young college students, we want to be out there and we want to take action, but sometimes, we don't have the right direction. SSI is super crucial in channeling that passion and focusing it where it's needed the most on different campuses."

Yonatan Herzfeld, 20, from Stony Brook University on Long Island, N.Y., added that "SSI really empowers student leaders to be strong in their convictions and not be on the defensive. Not be the prey. Not wait for something to happen, but actively, preemptively and pro-actively creating pro-Israel movements."

At Kennesaw State University in Georgia, where 21-year-old Stephen Omorogbe, is a senior, SSI hosted a 9/11 memorial event this past semester, and a female student approached their table and started cursing them out, saying "f**k you, f**king Israel" and 'You Nazi asses need to get out of this campus."

"The absolute consensus about Israel here on campus is that it's a bad force."

Omorogbe, who is Nigerian, said the SSI conference taught him how to bride a divide between pro-Israel students and those who are against Israel, sometimes without even knowing much the country. He said students constantly exposed to pro-Palestinian displays on campus will have a negative opinion about Israel "almost through osmosis," and that many people form negative opinions subconsciously by seeing false information on social media and other places.

"I think that subconscious twisting of the truth is what's most dangerous because it's pernicious in the sense that you don't even know that it's happening," he said.

The conference has helped him become less nervous about speaking up in support of Israel.

"I'd always think that maybe there's no use in me fighting, and I think after this I feel empowered because I know more information that I can point to. I have more information on my side," he said, "whereas before I was kind of hazy. I didn't really know exactly what to say, how to reach that person. But now, I feel like I can tailor my persuasion more effectively.

"Having more information on your side in a sense gives you peace because you know you have more tools in your tool kit that you can pull from. And I don't feel bad for being pro-Israel anymore because it's the right thing to do. Having that information, having the truth, it eases any feeling of anxiety."

Ofir Dayan, president of SSI Columbia and daughter of the consul general, told JNS "many campuses are waiting for something to happen to wake up and do something; that's not what we do. And even when stuff happens, I believe SSI knows how to handle it better."

The 25-year-old junior, who completed mandatory service in the Israel Defense Forces before attending college, said her school has held "Apartheid Week" every year for a few years now, and until SSI came on campus, pro-Israel students never protested. Instead, she said, "their mindset was, 'Let's hide inside Hillel, lock the doors and wait for this to be over.' But it doesn't go away; it's anti-Semitism."

As she said in 2017 in The Times of Israel, "I decided to go to college in America because, first of all, with my experience in the IDF Spokesperson's Unit, I felt that the international community and international media are not aware of Israel and its positions on many things. And I felt that this was a situation that needed to be fixed, especially in Ivy League universities."

With the help of SSI, once a semester pro-Israel students organize a "Hebrew Liberation Week" timed to "Apartheid Week," where they put up displays across campus that talk about Jewish identity, Israel and the Jewish connection to the land.

According to Dayan, one of the biggest problems for pro-Israel students at Columbia is also the number of openly anti-Semitic tenured professors who teach their racist views in class, such as Hamid Dabashi, who has claimed that Israel is behind "every dirty treacherous ugly and pernicious act happening in the world."

"It's important to continue focusing on promoting an accurate narrative about Zionism that doesn't leave out any part of the story."

"While I can confront SJP when they stand outside with a fake wall, I don't know what is being said in every moment in every class," she said. "And people in college, especially when they're in the younger side, tend to see what their professor is saying as something that is necessarily true. Even me as a student, I can be vocal, loud and everything, but when it comes to believing me or believing their professor, most students would believe their professor." 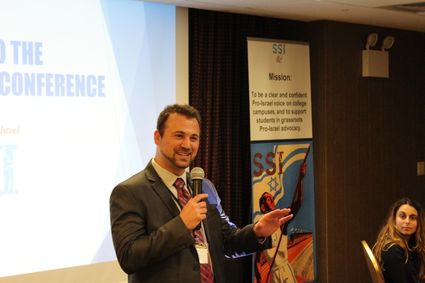 Another threat is the way people talk about Israel and Zionism on campus. Being a Zionist is equated with being a Nazi and is used as a curse word, she said. "The absolute consensus about Israel here on campus is that it's a bad force. Even if people are not aware of what's happening on the ground, their first connotation of Israel is something bad."

Sinelnikov said the goal of SSI is to be proactive, not just reactive, and to encourage students to not be apologetic for supporting Israel. He hopes that students at the conference learned more about Zionism and Israel, gained confidence in discussing those topics with others and took away information that will prove useful in the future.

"I want students to know what Zionism is, and take it to the campus grounds and to be able to advocate for it and speak confidently about it," he said. "Sometimes, you don't need to know 100 percent the full picture, but you need to be confident enough about saying it. People will see your confidence about it, and they will join it."