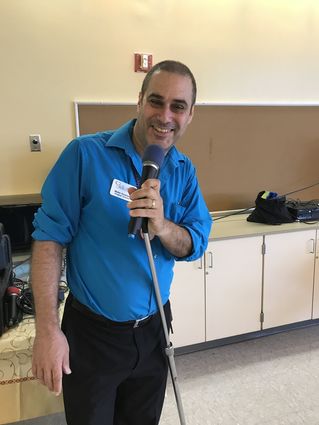 Many of you know Walter Goldstein from his work for many years with The Jewish Pavilion. As a program director, he brought so much to seniors in Central Florida. For an amazing 16 months after being diagnosed with pancreatic cancer, we witnessed a miracle. Walter had two Thanksgivings, two Chanukahs, two New Years, his sister's birthday, his mother's birthday, his wife's birthday, a Passover, his 50th birthday, his son's 21st birthday, two reunions, some travel-he's lived all of his wishes, and has blessed so many of us.

Even after his diagnosis of Pancreatic Cancer, he was still visiting as many seniors as he could, bringing smiles and music. After a very long fight, "Karaoke for the stars" now has a new host.

At 8:15 p.m. on Jan. 7, 2020, Walter Goldstein (Sky) began his new career. He is in heaven leading karaoke for the stars. He brought us light, love, music, endless smiles and joy. Thank you all for your love, prayers, support, and generosity. We know you are all broken hearted as we are, but he wished only laughter and light. No tears.

There will be a program at Kinneret by the Jewish Pavilion on March 5, at 2 p.m., and a celebration of life on March 10th at 5:30 p.m. at the VFW on S. Goldenrod Road in Orlando. Please email Penny Goldstein D'Agostino at penny@jewishpavilion.org for RSVP and details.

Donations to the Jewish Pavilion (which he truly loved) will go towards a permanent leaf on the office's tree of life.