A call to stand against anti-Semitism through Jewish core values 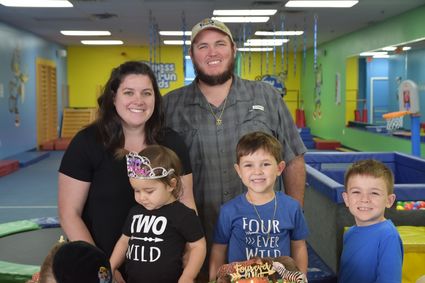 Matthew Gales with his wife, Michelle Goodman, and their three children.

Matthew Gales has a goal and he wants the Jews of Orlando to embrace this goal: To unite and stand for what is right-To reject hate while embracing love and community.

While anti-Semitism is not as prevalent in Florida as it is in other parts of the country and in Europe, Gales expressed that it is never too early to show Jewish solidarity and pride in mass, as was recently shown in the march against anti-Semitism in New York City.

"If we sit here and start reclusing ourselves, saying we've got to be careful, then anti-Semitic attacks will start moving forward," Gale stated. "We are taking measures to secure our synagogues, but people are cutting back in their public lives and that isn't a good way to do it. I've heard people say they want to take their mezuzah off their house so people wouldn't target their homes. That is scary to think!"

Gales, who is a member of the Southwest Orlando Jewish Congregation, is not planning a march. He is coordinating an Orlando Jewish Awareness Event to be held March 15 at Lake Eola. This event will be a gathering to remind one another to exemplify the core values of the Jewish People: peace, justice, unity and truth. This event is for all Central Florida Jewish people, affiliated and unaffiliated. His hope is the more who come out, the better.

He is in liaison with StandWithUs, Emunah of America, Jewish community leaders across Orlando from all backgrounds, as well as leaders from communities outside the Jewish community who may wish to show their support and participate in this event. He has spoken with Gov. Ron DeSantis's office and Sen. Rick Scott.

"Come join us as we fight off darkness by fulfilling and publicizing these powerful Jewish values," he said. "We truly wish this to be an influential revival for our community and the population of the city. We hope to be a reminder to our fellow Jews by publicizing the timeless and significant values of the Jewish people."

The date is set, but the planning is still in the early stages. For more information about this event, visit Orlando Jewish Awareness Events on Facebook. If you would like to help in any way, contact Gales at mattconch@gmail.com or call him at 321-314-5093.

Watch for more details about this event in the Heritage.