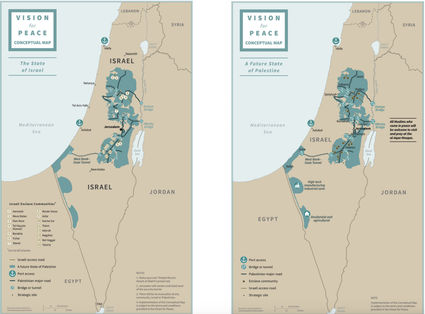 President Trump's peace plan includes two detailed maps of what a two-state solution could look like.

(JTA)-The Trump administration put questions about the seriousness of its Israeli-Palestinian peace proposal to rest Tuesday by delivering a 181-page, detail-laden document that outlines a clear-if one-sided-vision for the future of the region.

The document includes sections on history, security and economics, among others. We've got a roundup of the most important details here.

But the quickest way to make sense of the plan might be to skip to pages 41 and 42. That's where you can find two "conceptual maps"-one of Israel under the plan and the other of "the future state of Palestine."

The maps show that Israel would include 15 "enclave territories," or settlements within the West Bank, and that an underground tunnel would stretch approximately 30 miles between the West Bank and Gaza to create a technically contiguous, but geographically disparate, Palestinian state.

"All Muslims who come in peace will be welcome to visit and pray at the al-Aqsa Mosque," the map of Palestine says. The mosque, constructed on the Temple Mount in Jerusalem, is currently inaccessible for Palestinians living in Gaza.

Both the annexed territories and the underground tunnel would represent major changes in the region. Israeli Prime Minister Benjamin Netanyahu, who joined President Donald Trump to announce the plan on Tuesday, said Israel could begin annexation as soon as this week.