Amid a spate of Palestinian attacks, Israel's security forces seek to prevent an explosion of violence 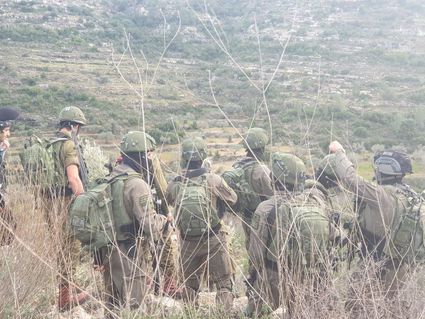 IDF commanders and soldiers from the pursuit of the assailant who committed the shooting attack at "HaParsa" Junction. Feb. 6, 2020.

(JNS)-The quick succession of Palestinian attacks on Israeli security forces in the past 24 hours appears to be a chain reaction of unorganized incidents, each one forming the "inspiration" for the next attacker and each attack forming a link in the terrorist chain.

The goal of Israel's security forces now is to cut that chain and freeze the momentum of incidents before they snowball into a wider wave of violence that will be far more difficult to control.

In a joint operation launched by the Israel Defense Forces and the Shin Bet domestic intelligence agency, security forces on Thursday evening apprehended the Palestinian car-ramming attacker who injured 12 Golani Brigade infantry soldiers in Jerusalem, one of them seriously. The injured include one lone soldier from the United States.

Meanwhile, tensions in the West Bank city of Jenin remain extremely high a day after Israeli security forces entered the city to demolish the home of a terrorist who took part in a deadly attack in 2018.

The IDF units ran into a major Palestinian riot in the city, with attackers hurling IEDs and firebombs, and gunmen launching sniper attack on soldiers, who returned fire. Such scenes have not been seen in Jenin for a long time and may signal a new level of escalation.

Two Palestinians were killed during the clashes, one of them a member of the Palestinian Authority security forces. That will put a further strain on the ability of the IDF and the P.A. to maintain security coordination-a coordination that has served the security interests of both sides well for years against the common enemy: Hamas.

After a situation assessment, the IDF's senior command decided to inject backup forces into the West Bank to increase the army's ability to immediately respond to incidents and deter potential attackers.

At the same time, the army is also seeking to minimize disruption to the fabric of life of ordinary Palestinians. This effort, to isolate the incidents, is aimed at preventing the wider Palestinian public from getting pulled into the violence.

Roughly 150,000 Palestinians work in the State of Israel and in Israeli settlements, with each one supporting entire families and households. This contributes greatly to economic stability and a higher standard of life. In general, the IDF has been working hard in recent years to boost the Palestinian economy, supporting the creation of industrial zones and removing as many impediments as possible for travel. The relatively good economic situation of many West Bank Palestinians has been a key stabilizing force.

Maintaining this situation and preventing deterioration require a delicate balancing act. It entails responding firmly to terrorism while avoiding wider disruption to the Palestinian economy and fabric of life; this is the IDF's strategy going forward. This balance is reflected in comments made by IDF Spokesman Lt. Col. Jonathan Conricus on Thursday, who said that the military "does not seek escalation, but it will maintain security and seek to apprehend perpetrators."

However, this mission will be made more difficult by the seething Palestinian anger at the Trump administration's new Mideast peace plan, and the widespread anger at what Palestinians see as Israel's intention to annex territory. The political arguments over the so-called "deal of the century" cannot ignore the fact that Washington's proposals were always going to be viewed as a pro-Israeli plan in Palestinian eyes.

A few 'matches' can spark a fire

Still, it's far from inevitable that this anger must somehow result in a third intifada. The very fact that the Palestinians of the West Bank have much to lose and have little interest in paying personal costs, like the people of Gaza do for Hamas's wars against Israel, improves Israel's chances of being able to contain the latest flare-up.

So far, there appears to be no visible guiding hand behind this escalation. Incidents such as the significant riot in Hebron that broke out Wednesday, which saw one Palestinian youth who hurled a firebomb killed in clashes with the IDF, appear to be spontaneous, although social media is helping to fan the flames.

The incidents underline the highly flammable nature of the arena and demonstrate how easily a few "matches" can spark a fire. The IDF's effectiveness as "firefighters" who arrive to put out the flames and stop them from spreading will be put the test in the coming days, including during the sensitive Islamic Friday prayers.

Meanwhile, in Gaza, a visible guiding hand is at work escalating the situation. Overnight between Wednesday and Thursday, terrorists fired three mortars into southern Israeli territory, triggering alerts, but failing to cause casualties. Hamas has signaled to smaller Gazan armed factions that they are free to fire such projectiles. Hamas operatives have also been directly behind the ongoing launching of explosive balloons in the direction of Israeli villages and towns in recent days-all part of an effort to extort the Israeli government into further concessions in ceasefire negotiations.

The Israeli Air Force struck two Hamas military assets in Gaza in retaliation, and IDF officials are warning that Israel will not tolerate such attacks. Since March 2018, Hamas's game plan has been to engage in controlled escalations in Gaza to pressure the Israeli government to lift security restrictions on Gaza. Hamas has been able to calculate with a high degree of accuracy has far it can go without sparking a war. Yet if warnings coming out of Israel are an indication, it's very close to the red line.

As a result, both Palestinian arenas are tense going into the weekend, but neither has so far gone past the point of no return.