Jews in the Land of Disney: Meet the multi-talented Rabbi David Kay 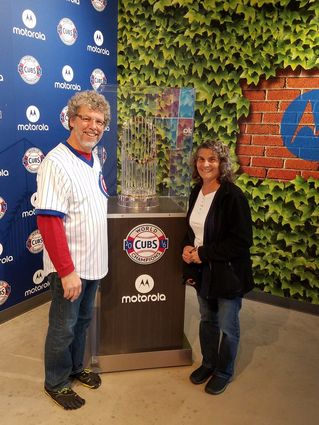 A lifelong cubs fan, Rabbi Kay and his wife, Joanne Goldman Kay, pose with Cubs World Series trophy in Chicago, September 2017. He is also wearing his five-toed footwear-"the most comfortable shoes on the planet."

Born and raised on the southwest side of Chicago, Rabbi David Kay of Congregation Ohev Shalom grew up in an area rife with anti-Semitism. This was the late 1960s, early '70s. Surrounding their tiny Jewish community were predominantly Irish Catholic, blue-collar neighborhoods. His small Conservative congregation was bordered by the parking lot of a very large Catholic church, whose priest embraced the pre-Vatican II mentality. "If their lot was empty, and someone from our congregation parked a car there, the priest would run out screaming to shoo them off. I still have that vision in my head," Kay said.

He experienced discrimination on a wholesale level while going to public school. He and his Jewish friends were often shunned by their schoolmates, at times he had to fight. "I wasn't a fighter and there were times I'd come home the worse for it."

That's why Kay embraced USY (United Synagogue Youth) in high school. "USY saved my life," Kay said, sitting comfortably in his office at Ohev Shalom, wearing his endearing five-toed footwear, which he swears are the most comfortable shoes on the planet.

His involvement in Jewish organizations began early in his life; he became president of his USY chapter and ultimately worked his way to becoming the Chicago Region USY president.

His father was a scientist and his mother a kindergarten teacher. He recalled that when his father was working as an industrial chemist, there were times he would come home covered in a variety of chemicals.

Kay's mother was raised in a Jewish home. His father however, converted before he married. Both parents were well-educated, instilling in Kay a love of learning. "Our home was filled with books. People in the neighborhood would come to our house instead of going to the library. We were more convenient than the library, had a vast selection of books and we didn't charge late fees."

Kay attended 10-day USY summer camp programs at Camp Ramah in Conover, Wisconsin, on Upper Lake Buckatabon. The camp was the first of the Ramah camps, established in 1947. The USY program began at the end of that year's Ramah session. Kay loved being with young people of similar backgrounds, as it was a respite from growing up in an area where Jews weren't accepted.

Kay spoke fondly of his congregational rabbi, Rabbi David Tamarkin. "He was a curmudgeon on the outside, but soft on the inside." Rabbi Tamarkin was influential, offering him guidance and advice that would help him navigate throughout his life. Kay had interest in becoming a rabbi at this juncture, however, Rabbi Tamarkin steered him away. "He was right. I wasn't mature enough or ready for it at that time."

So he attended the University of Illinois, majoring in ecology, ethology, and evolution. "This major was offered for the four years I was there. Within a few years after I received my EEE degree, they did away with the program."

He returned to Chicago after college and started working odd jobs. He worked in a warehouse and as a research technician. It was during that time he started a band with a good friend. "The band was ultimately named Buffalo Trout. We wanted an all-American name, a good, solid name. Buffalo are uniquely American, and we thought about copping the name of the David Mamet play, 'American Buffalo.' Someone else suggested Richard Brautigan's book, 'Trout Fishing in America.' We eventually compromised and put the two together."

The band played original music in what they called "rhythm and roll."

"When we first began, it was just my buddy and me on acoustic guitar. Eventually we added drums, bass, keyboard, and a back-up vocalist. Because we played original music, we weren't booked as frequently as we could have, but we didn't really care. As long as we made enough to cover expenses, that's all that mattered."

His day job was working for an animal welfare organization called the Treehouse Animal Foundation, which operated a cageless, no kill, shelter for sick, injured, and abused stray cats. "Early on, we handled a variety of shelter animals, and we became grassroots animal activists."

At first Kay worked hands-on with the animals in the adoption center, then added the role of director of humane education. He also earned a credential as a certified humane investigator for the State of Illinois.

During this time, Kay took a gig performing at a coffeehouse program at Congregation Bene Shalom of the Deaf, in Skokie, Illinois. The synagogue was founded by 12 deaf Jews who had loosely organized prior as the Hebrew Association for the Deaf of Chicago. As predominantly hearing families with deaf members and others who wanted to support the work of Bene Shalom joined, there were eventually more hearing than deaf. The by-laws, however, call for officers of the congregation to be deaf and Bene Shalom's mission to serve the deaf Jewish Chicagoland community has never faltered.

Kay had a friend who came along as his American Sign Language interpreter that night. A few days before the performance, his friend asked if there could be a back-up interpreter. The coffeehouse organizer assured Kay he had just the person. Although the back-up interpreter wasn't needed after all, it turned out well for Kay. She was Joanne Goldman, and they were married five months later.

Through a program to train leaders and educators for the Jewish deaf community, launched by the rabbi of Bene Shalom, Kay had the opportunity to spend a year studying at the Jewish Theological Seminary of America in Manhattan. He and Jo learned just before they headed east that Jo was pregnant. "It was a wonderful time in our lives. I used to say our son, Jonah, was planted in Chicago, but blossomed in New York."

Kay fell in love with learning at the seminary. "The instructors were passionate as they knew they were training leaders in the Jewish community who would go back and make a difference. The classes were small, focused and the instructors, for the most part, were brilliant. They took the literary approach to teaching content from our sacred texts. When viewed as literature, the Torah, Mishnah, and other sacred books open up the meaning, expanding it on many different levels. During that year, I realized that I wanted to become a rabbi. When we got back to Chicago, I applied to return to JTS full time, in the rabbinical school.

"At that point, I didn't want to be a pulpit rabbi. However, when I told one of my teachers in Chicago that, he pulled me aside and asked, 'Do you want to teach children?' 'Of course!' 'Do you want to teach adults?' 'Naturally!' 'You want to do weddings, funerals, b'nei mitzvah, baby-namings?' 'Yes, yes, yes.' 'Well, there's only one way you can do all of that-in the pulpit!'"

In his senior year of rabbinical school, he landed a student pulpit at a start-up Conservative congregation in Naples, Florida. He would fly down once or twice a month to lead weekend services. Kay began to travel right after 9/11 had occurred, making the travel from New York to Florida and back more difficult due to heightened security. The congregation consisted of 25 families. "When I graduated, they offered me a full-time position," Kay recalled. "Two years in, the congregation imploded."

That's when Kay learned through a lifelong friend that Congregation Ohev Shalom, an established congregation in Orlando, which had been in existence for eighty-five years at the time, was seeking a second rabbi.

"It was the right fit for my family and me. The congregation had grown to the point that they needed another rabbi. The professional staff had all been there for years. The lay leadership was great. There was a dynamic religious school and youth program for our son. They were looking for someone with life experience. We came to visit for a Shabbat and the people were so warm and welcoming. We knew we'd found our new home." 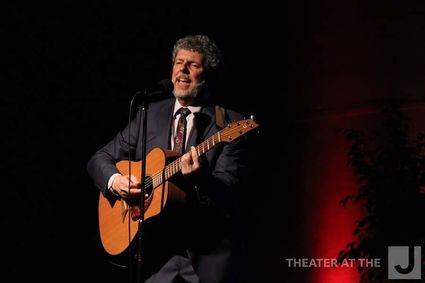 Rabbi Kay worked behind Rabbi Aaron Rubinger for 13 years, until Rubinger became Rabbi Emeritus after High Holidays in 2017. Now, as the senior rabbi, Kay is enthusiastic about the direction and the future of Ohev Shalom.

"We celebrated our centennial in 2018," he said. "As we start our second century of service to the Jewish community of Central Florida, we're implementing a well-thought-out strategic plan. The pillars of Conservative Judaism are tradition and change. We're moving forward with ways to meet the needs of an ever-changing world in the context of cherished Jewish traditions."

"Greater Orlando is an exciting place to be. And the Jewish community has so much to offer. It's been a pleasure to serve these last 15 years-and I'm honored to have a part in what comes next."