A community celebration during COVID-19 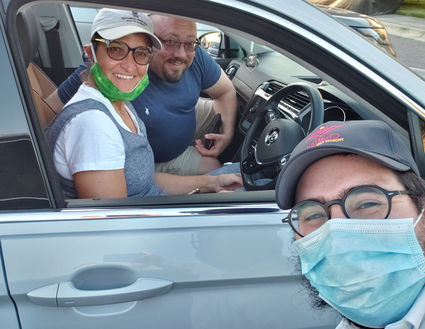 Lag B'Omer, a minor Jewish holiday, is traditionally celebrated with major fanfare. Parades, picnics, bonfires, music and displays of Jewish pride mark the occasion that falls 25 days after the end of Pesach, on the 33rd day of the Omer count. It commemorates the miraculous ending of an epidemic that killed 24,000 students of Rabbi Akiva in the second century. It is also the anniversary of the passing of one of Rabbi Akiva's foremost students, Rabbi Shimon Bar Yochai, also known as the Rashbi, the author of the Zohar, the foundational text of Jewish mysticism (kabbalah). The epidemic is attributed to a lack of respect among the scholars of the day, and so themes of unity and healing are central to its celebration.

This year, as a modern-day pandemic forces social distancing, making it a challenge to celebrate a holiday of togetherness and significantly a day, celebrating the ending of a plague.

About 6 weeks ago, Rabbi Yanky Majesky of Chabad Lubavitch of North Orlando and Nate's Shul in Longwood, saw a community member's photo on Facebook at a drive-in theater. "The Baal Shem Tov teaches that everything we see is a lesson for us to use in our service of G-d," said Majesky. With Lag B'Omer approaching, a drive-in event was the perfect solution to his Lag B'Omer conundrum.

"This is my first ever drive-in concert, show me your headlights," said world renowned Israeli singer Gad Elbaz as he jumped out of his blue convertible and hopped onto the stage in front of rows of parked cars at Epic Theatres, a drive-in movie theatre in Deltona, Florida. The theatre was filled to capacity. Online ticket sales had sold out days earlier.

As Elbaz sang from the stage, families watched on the big screen, the music streaming through their car radios as well as the outdoor speakers. The audience interacted by honking their horns for applause and flashing headlights to the rhythm.

Organizers took precautions to keep the need for physical interactions to a minimum. At entry every car received a booklet with instructions asking them to remain inside their cars, a concession menu and program guide. The J Grill of Ormond Beach set up a barbecue outside of the parking lot and delivered attendee's orders to their cars. The rabbis of the participating communities prerecorded a collaborative video explaining the message of Lag B'Omer and a prayer was said for the health of all those still recovering from COVID-19. From a video collage, children from each community lead the crowd in reciting various Torah verses. Jugglers, stilt-walkers and balloon artists walked up and down the aisles of cars bringing smiles and cheer to young and old alike.

One of the beloved traditions of Lag B'Omer is the lighting of bonfires. This year, TheNinja Tronics lit up the night with fire poi, fire eating and fire breathing.

People drove over two hours to participate and many others watched the livestream from home. Chanshy Majesky of North Orlando Chabad, said the evening was an incredible success and the boost everybody needed. "It's nice to get together on zoom, but we're people, we want to see each other for real. This is the closest we can get to getting together as a community while looking out for everyone's safety," she said.

"The people were thirsty for something positive, a sense of community, and some old fashion joy; This drive-in concert accomplished all three," added Rabbi Konikov of Chabad South Orlando. 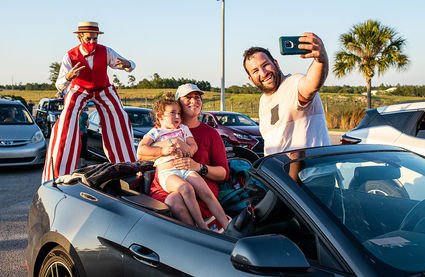 A family takes a photo with a stilt walker

The Lag B'Omer celebration was organized and sponsored by four of the Chabads in central Florida-Chabad of North Orlando, South Orlando, Greater Orlando and Greater Daytona and brought together people from as far as Tampa and Jacksonville and everywhere in between.

"We have to see everything that happens in life as an opportunity; instead of the virus keeping us apart, it actually created a greater unity as this program brought together several communities for one event," explained Rabbi Asher Farkash of the Daytona Chabad.

As Sharon Buxbaum of New Smyrna Beach posted on Facebook, it was "an incredible evening, done safely and perfectly!"

"We feel lucky to have been there," said David Moldau of Longwood.