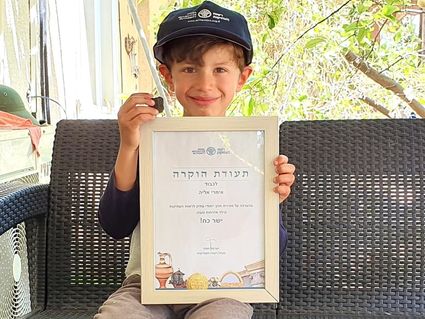 Imri Elya here with the ancient tablet and certificate from the Israel Antiquities Authority.

(ISRAEL21c) - The story probably didn't end happily for the bound and naked captive depicted on a 3,500-year-old clay tablet recently found in Israel.

Things have turned out much better for the six-year-old boy who stumbled across this rare find a couple of months ago.

Imri Elya from Kibbutz Nirim near the Gaza Strip spotted the 2.8-square-centimeter (1.1-square-inch) tablet while walking with his parents at the Tel Jemmeh archaeological site near Kibbutz Re'im.

The curious boy picked up the object and saw two figures engraved on it. His parents contacted the Israel Antiquities Authority and the item was transferred to the IAA's National Treasures Department.

After photographing and documenting the artifact in the IAA's digital photography laboratories, archaeologists realized that nothing similar has ever been discovered in archeological excavations in Israel.

The tablet depicts the scene of an important man leading a naked captive with hands folded and tied behind his back. The captor has curly hair and a full face, while the captive is thin and his face elongated. 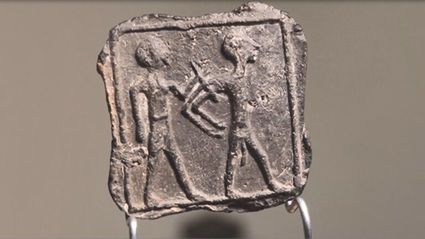 IAA archaeologists Saar Ganor, Itamar Weissbein and Oren Shmueli Archeologists believe the tablet was made in the Late Bronze Age, between the 12th and 15th centuries BCE. During this period, the Egyptian Empire ruled Canaan.

Tel Jemmeh is identified with the Canaanite city of Yurza, one of the strongest Canaanite cities in the south of the country. The scene depicted on the tablet may symbolically describe the power struggles between Yurza and a nearby city such as Gaza or Ashkelon.

"This opens a visual window to understanding the struggle for dominance in the south of the country during the Canaanite period," the archeologists said.

Imri may not grasp the historical significance of his discovery, but he's gotten plenty of attention and a certificate of good citizenship from the IAA. He joins many other Israeli kids who have stumbled across archeological treasures.