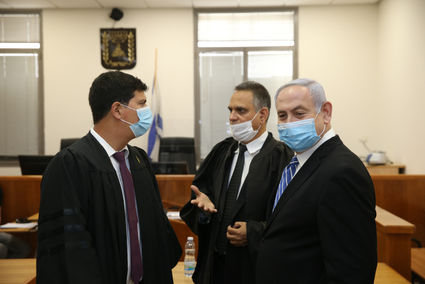 (JNS) — Israeli media and their left-wing anti-Netanyahu allies have been anticipating for years the moment Benjamin Netanyahu would be dragged into a courtroom. Unable to beat Israel’s longest-serving prime minister at the polls, many have looked to a politically left-leaning legal system to get him out of office.

Many pundits eagerly anticipated pictures of a guilt-ridden former prime minister, defeated at the ballot box, sitting depressed on the wooden benches of the Jerusalem District Court. Yet, at Sunday’s arraignment hearing marking the start of the official legal proceedings against Netanyahu, the picture was entirely different.

Instead, the nation saw a confident Netanyahu, backed by the top brass of his Likud Party, coming off an impressive third consecutive electoral victory—in spite of the formal indictments leveled against him—expressing his certainty that the citizens of Israel would finally see for themselves that their embattled prime minister had not committed a felony.

Prior to entering the courtroom, a defiant Netanyahu had made the legal system itself the defendant, stating that the trial “is an attempted political coup against the will of the people.”

The state prosecution had done everything they could, he said, “to ensure that I stood here today not as a prime minister, but as an ex-prime minister. As a defeated, grieving politician.”

Railing at what he called an “anyone-but-Bibi gang,” Netanyahu turned to his largest and most important backers, the Israel electorate, stating: “Citizens of Israel, what is going on trial today is an attempt to thwart the will of the nation… You are far smarter than this gang thinks you are and thinks that we are. You gave the Likud, under my leadership, the highest number of votes any party has ever received in the history of the country.”

That Netanyahu remains in power, following a bitter campaign waged by the state prosecution, his political opposition and the media, speaks volumes about the public’s faith in their prime minister and lack of trust in the justice system.

Over three successive election campaigns, a steady stream of cherry-picked details from the various cases against Netanyahu were illegally leaked to the public. Those leaks, plus Attorney General Avichai Mandelblit’s carefully-timed statements on his intent to issue indictments, were intended to sour Israel’s electorate on Netanyahu’s continued reign just as citizens were getting set to go to the polls.

Had it not been for the indictments, there is every reason to believe that Israel’s longest-serving prime minister would have easily secured the largest electoral victory in Israeli history in the first of what soon became three elections. Such a victory would have saved billions of taxpayer dollars and significant voter frustration. Factoring in the indictments, Netanyahu’s victory is even more impressive.

Not only did Netanyahu receive more votes and more Knesset mandates than at any time in his combined 14 years at the helm, but he effectively demolished the opposing Blue and White Party, which broke in half after failing for the third time to form an alternative coalition.

Challenger Benny Gantz, now chairman of a party less than half the size of Netanyahu’s Likud, serves as vice premier in a Netanyahu-led unity government.

The felony charges facing Netanyahu include alleged quid pro quos to secure favorable press coverage. A legal brief submitted to Attorney General Mandelblit by internationally-renowned lawyers including Nathan Lewin and Alan Dershowitz ahead of the issuance of formal indictments noted that such charges would represent an unimpressive first for any country with a free press.

At the time, one of the brief’s authors, law professor Avi Bell, told JNS, “There is no case we can find anywhere in the democratic world where positive coverage has ever been considered a potential bribe.” This includes numerous well-studied cases including in the United States, Great Britain and Australia, in which positive press coverage was traded in an exchange for legislative or regulatory favors.

“Pursuing these charges is unprecedented in the democratic world, dangerous to the fabric of Israeli democracy and ill-advised,” said Bell.

Furthermore, in one of the bribery cases—involving the publisher of Israel’s Yediot Ahronot daily newspaper, Arnon Mozes, who is also a defendant—prosecutors readily acknowledge that the accused quid pro quo never actually took place.

Netanyahu stated before entering the courtroom that prosecutors “invented a special clause for me that doesn’t exist in any law book in Israel or the world. How absurd.”

The arraignment was held exactly two months to the day after the Supreme Court stunningly violated the very Basic Laws it is enshrined to protect, interfered in the independence of Israel’s legislative branch and ignored 72 years’ worth of electoral precedent by requiring that Knesset Speaker Yuli Edelstein hold snap parliamentary vote to replace himself prior to the negotiation of a parliamentary majority coalition.

The Supreme Court issued its unprecedented ruling for the sole purpose of giving Netanyahu’s challengers a momentary window to pass retroactive legislation specifically aimed at preventing him from forming a government.

“This is the rule of law? This is democracy?” said Netanyahu.

Just as confident that he would prevail in the courtroom as he did at the ballot box, Netanyahu turned the accusations against him back on an overreaching legal system.

“I stand here today as your prime minister with my back straight and with my head held high,” said Netanyahu, and demanded that the trial will be conducted in a completely transparent manner, televised live and with no censorship.

The court meanwhile has ruled that proceedings will not be televised, unlike recent Supreme Court hearings on the legality of Israel’s new coalition agreement.

Ahead of the arraignment, new Knesset Speaker Yariv Levin wrote in a Facebook post on Sunday that the opening of the trial “will be remembered as one of the lowest points in the Israeli judicial system.”

A verdict is unlikely to be handed down for well over a year, if not longer. The prosecution has named well over 300 witnesses in the three separate cases, including several key state witnesses, whom Netanyahu claims were illegally extorted for their testimony.

Meanwhile, Israeli law explicitly permits a sitting prime minister to remain in office, even through a conviction, until all formal appeals are exhausted. In other words, even if convicted, Netanyahu will have the legal right to remain in office for the next several years, provided that the electorate continues to want him to do so.

Gantz, who for the better part of the last year and a half repeatedly accused Netanyahu of corruption, had no choice Sunday but to take a more measured stance, as vice premier of a Netanyahu-led government.

“Just like every citizen, the prime minister too has the presumption of innocence, and I am sure that the justice system will give him a fair trial,” Gantz tweeted. “I again emphasize that my colleagues and I have full faith in the justice system and law enforcement.”

He added that “at this time, perhaps more than ever, as a state and a society, we must seek unity and reconciliation, for the sake of the country and all of its citizens.”

Such reconciliation remains unlikely until Jerusalem’s District Court issues its final ruling. Meanwhile, a defiant Netanyahu, despite the best efforts and wishes of an “anyone but Bibi” press, continues to have the presumption of innocence among the clear majority within Israel’s most equitable court: the court of public opinion.

And just as Netanyahu defied the odds against a stacked deck and defeated his Blue and White challengers at the ballot box, his opponents should not be surprised if he emerges from this trial fully-acquitted.