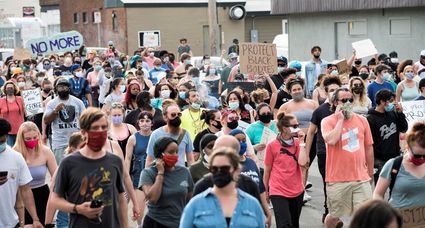 Hordes of people protest against police violence one day after the death of George Floyd, a 46-year-old African-American, while in police custody in Minneapolis, May 26, 2020.

NEW YORK (JTA) - "Pray for the welfare of the state," Rabbi Hanina writes, "for if it were not for the fear thereof, people would swallow each other alive."

As cities around the nation burn with righteous indignation over yet another horrific incident of police brutality directed against a black man, Jewish leaders must reflect on our own long and ambiguous history with police as we grapple with our role in what is unfolding today.

Historically, Jews have had an ambiguous relationship with the police. Their stabilizing role in society is essential for us, a vulnerable minority. But we al...