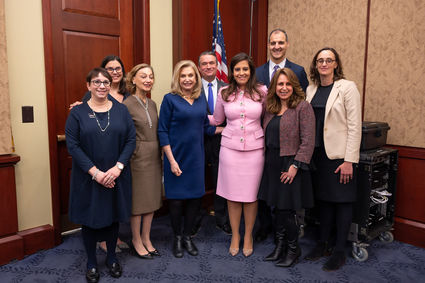 Rep. Carolyn Maloney (D-N.Y.) (left center) next to Rep. Elise Sefanik (R-N.Y.) (right center) along with officials from organizations, including Hadassah and the U.S. Holocaust Memorial Museum, following the passage of the Never Again Holocaust Act by the U.S. House of Representatives.

(JNS) - Amid the rise in anti-Semitism in the United States and abroad, U.S. President Donald Trump signed the Never Again Education Act into law as part of Jewish American Heritage Month, one month after the 75th anniversary of the defeat of Nazi Germany.

The story behind the passage of this landmark legislation is one that transcended the usual partisan politics of Washington, D.C., bringing together Jewish and Christian groups, and liberal and conservative lawmakers in a rare display of bipartisanship to have a measurable impact on awareness and understanding of the ramifications of the...