Jews In the Land of Disney: Pilar Basrawi-Marrero has come home to Judaismo 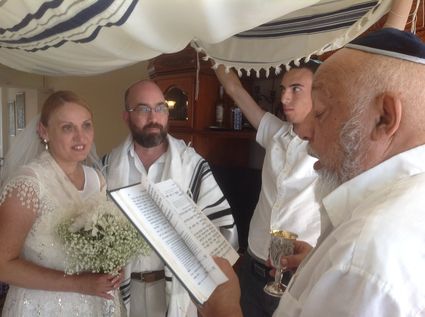 This is the third article in a four-part series about the Puerto Rican Jews living in Central Florida and their history.

"Grito de Lares," a revolt protesting Spanish rule over Puerto Rico began on Sept. 23, 1868. The revolutionaries also sought religious freedom and the abolition of slavery. The revolt failed, but as a result and with the intent to tamp down trouble, the Spanish government granted more political autonomy to the island two years later in 1870.

Today, Puerto Rico has the largest and wealthiest Jewish population in the Caribbean. It's the only island that hosts all three major Jewish denominations - Orthodox, Conservative and Reform. Chabad came to the island in 1997.

Kosher food is now available through the Chabad, and Hebrew school classes are held at the Sha'are Zedeck Synagogue/Jewish Community Center. The JCC has programs for those on the island who are seeking to explore their Jewish heritage.

When Pilar Basrawi-Marrero was a little girl, she remembers going to synagogue with her great-grandfather on her father's side. When he passed away, she never went again. Basrawi-Marrero - whose maiden name is Marranos Torrales (which comes from marranos or anusim), and was changed in America to Marrero - refers to herself as an anusah, singular female Hebrew for coerced. Anusim (coerced ones) is a legal category of Jews in halakha (Jewish law) who were forced to abandon Judaism against their will and forcibly converted to another religion.

"Three years before my son's bar-mitzvah I had a vivid dream. My great-grandfather came to me as clear as day. He was proud that he had fought in the [Spanish] American war. He said to me, 'Tell your son that he needs to understand who we are.' I said, 'Yes, Papa. I told him about you. I've honored your memory. I often go visit you in the cemetery.' He replied, 'I know you do. But listen to me, my great-great-grandson needs to know who he is. We... are... Jewish.' After that dream I knew. It became clear to me that I was a Jew and needed to find my heritage," Basrawi-Marrero said.

Like many other anusim on the Island of Puerto Rico, her relatives didn't speak much or at all about their heritage. Her grandparents learned that any talk about their identity could result in bad things happening to them. So, they disciplined themselves to put it out of mind. However, Basrawi-Marrero always had a sense that her grandparents on her father's side were different.

Her parents were both non-practicing Catholics. But there were some telltale signs that she observed. "We never ate pork, which is a big staple in the diets of Puerto Ricans. My mother cooked her vegetables with salt and water. Although this may sound odd to most, my mother made sure that there were no insects cooked with her vegetables, and I remember that she cleaned the chickens in a kosher manner."

During the Christmas holidays all of her neighbors decorated their houses with lights and other outside adornments for the holiday. They were the only ones who didn't participate in this tradition. "Our house was the only dark house in the neighborhood. As a child I had a sense that this caused problems with our neighbors," Baswari-Marrero said.

Her grandmother's family on her father's side, fled the Inquisition. Some escaped to France and others came to America. Her family spoke four languages - French, English, Spanish and Ladino.

Ladino is a mixture of Old Spanish, Hebrew, and is mixed with other languages such as Aramaic. This is known as Judeo-Spanish or Judaismo. The development of Ladino is parallel to that of Yiddish.

Basrwari-Marrero went to school at Lehigh Community College in Allentown, Pennsylvania, where she met her husband. "My father would never approve of any men I dated. But when I brought my husband home and told my father that he was Jewish, for some reason he strongly approved. He also told me that almost every woman in their family married Jewish men. My husband and father got along very well."

"My husband and I embraced Judaism in my home but I hadn't formally converted until after I had a heart attack in 2015. It was a wakeup call to me. After that I was worried that if something happened, I wouldn't be buried in a Jewish cemetery. My son grew up in synagogues and with Jewish values and traditions but technically he wasn't Jewish."

In 2017, Baswari-Marrero and her son finalized their conversion together, which took them a little over two years to complete. "I can't totally describe the strong feelings I had after converting, but I felt like I had finally come home. I've awakened from a nightmare, and I also feel that we're now fulfilling a prophesy."