Jews in the Land of Disney: The Share family volunteerism passed down l'dor v'dor 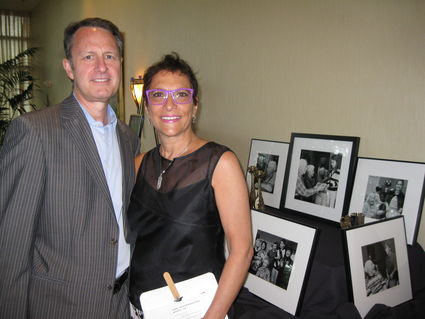 Adrian and Geanne Share came to the Orlando area in 1998. "My husband's an engineer whose passion is to see high-speed rail built in the U.S., and we came to Florida for that purpose. He's spent 20 years on different attempts to bring high-speed passenger service between Miami and Orlando. He led the engineering for the system that is being built between Orlando and Miami by Brightline, and oversaw the construction of the first phase between Miami and West Palm Beach that is temporarily shut down due to Covid-19," Geanne said.

"It's a clean diesel electric train, with beautiful interiors, with great comfort and amenities, and obsessive attention to the customer experience. Entering our stations is similar to the experience of entering the lobby of a luxury hotel," Adrian said. He is now commuting to Las Vegas every week as his attention has shifted to bringing a high-speed line from Southern California to Las Vegas. Juggling his time last year between work and synagogue, Adrian was the past-president of Temple Israel, Winter Springs.

Volunteerism is a powerful thing. Winston Churchill once said, "You make a living by what you get. You make a life by what you give." There are many benefits to volunteering and Geanne's parents understood this. They taught their children to give of themselves, and they recognized that giving is a way to act from empathy. They knew that by giving back you not only enrich other's lives, but it's also a powerful way to enrich your life as well.

The essence of volunteering incorporates solidarity, reciprocity, mutual trust, belonging and empowerment. And the Shares will attest that their work has contributed to the quality of their lives.

Geanne grew up in Brookline, Massachusetts. "My parents met during World War II at Ft. Riley, Kansas. My father was head of U.S. Army Criminal Intelligence and my mother was his secretary. My mother spoke five languages, which was useful working in the intelligence agency, but who knew? They fell in love. She was Catholic, born in Tacoma, Washington, and my father, who was Jewish, was born in Boston. My mother's family had immigrated from Northern Italy and my father's family from Lithuania. They had a civil wedding but eventually my mother, who was a very spiritual person, converted prior to my parents starting a family. I'm the youngest. I have two older brothers - Robert and Paul Snyder."

Geanne's father was a meat broker and invested in real estate in the Boston area. Both her mother and father had a tremendous influence in her life as it relates to making a difference in a community through volunteerism. Her parents were very philanthropic and she takes after them.

"My parents were involved in everything. I remember times when people like Henry 'Scoop' Jackson, Sarah Caldwell, Joan Sutherland, Arthur Fiedler, Leo Alexander, and many rabbis and priests came to the house for dinner or coffee."

Geanne's parents helped found The Association of Performing Arts - Boston. Her mother is also a lifetime president and founder of the Hull Chapter of Hadassah. "They made me who I am today. This is one of the reasons I volunteer. L'dor, V'dor - from generation to generation. I'm very much like my parents."

Geanne certainly stays busy. She has been actively involved in Temple Israel, Winter Springs for over two decades. She is the comptroller, serves on the board of directors, is involved in the Security, Budget/Finance, and the Ritual committee.

In addition to her roles at Temple Israel, she is past president of Kinneret Apartments and Kinneret Council on Aging. Kinneret Apartments is an affordable 300-unit apartment for seniors and offers amenities and social activities that enhance the life of its residents. "My mother was a resident, and during that time over 10 years ago, I was asked to be on the board. My family has been actively involved and my daughter, Olivia, is serving on the board today. The Kinneret Council on Aging does the programming for the residents."

Geanne also serves on the board for the Jewish Pavilion. The Jewish Pavilion enhances the life of residents living in over 70 independents, assisted-living and skilled-nursing facilities throughout Central Florida. Geanne helps with visitation, shabbat services, musicales, educational courses and other programs that help make seniors live enriched, fuller lives. Their purpose, "To see smiles on the faces of seniors!" Again, her family, including her mother, have been actively involved.

Geanne is actively involved on the JCRC, as stated on their website: The Jewish Community Relations Council, a part of the Jewish Federation, is the leading advocate for the Greater Orlando Jewish community, engaging in important policy discussions and ensuring that our voices are amplified. JCRC is one of 125 in the nation that form the grassroots of the national umbrella organization, the Jewish Council for Public Affairs.

What motivates someone to give of themselves in this way? Perhaps it's a desire to fulfill tikun olam, repairing the world, or perhaps committing oneself for the betterment of others is fulfilling unto itself. Geanne's parents set an example of what's important in life. She not only has made her parents proud, but she's taught her children - Angela, Ben and Olivia - what her parents taught her. As a cancer survivor, Geanne knows that doing things for others is the best thing one can do for themselves.