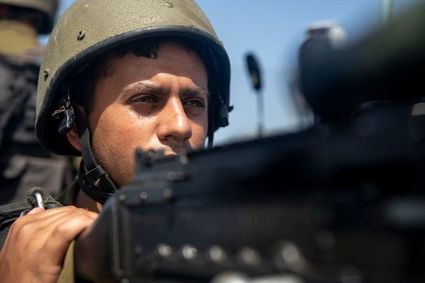 An Israeli sailor manning a gun on an naval ship.

(JNS) - As it conducts its mission to defend southern Israeli communities and vital strategic sites, the Israel Navy is also engaged in a quiet arms race with Israel's adversaries in the Gaza Strip - namely, Hamas and Palestinian Islamic Jihad.

A senior IDF source told JNS about the ongoing activities of the Ashdod Naval Base, which is responsible for a substantial part of Israel's coastal waters, stretching from central Israel to southern Gaza.

This area of jurisdiction, known as the Ashdod Arena, sees naval vessels securing Israel's borders and keeping a watchful eyes on developing threat...