Off-campus, but in touch: Students learn tools from CAMERA conference to fight anti-Semitism 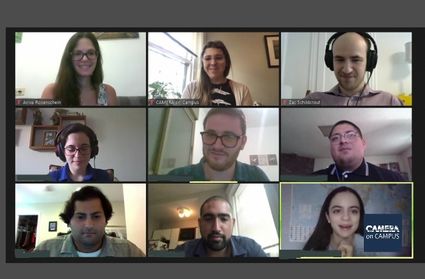 A view of CAMERA staff and students participating in the 2020 virtual student summit.

(JNS) - Due to global coronavirus pandemic, this year's CAMERA (Committee for Accuracy in Middle East Reporting and Analysis) student conference was held via Zoom, teaching students how to effectively combat anti-Israel and biased propaganda on college campuses and online. Unable to attend the typical five-day, in-person training session in Boston, more than 100 students from 66 universities in North America, the United Kingdom and Israel joined together virtually earlier this month, representing CAMERA's largest training to date.

The students participated in online sessions with experts in international law, in addition to media experts of English-, Spanish-, Arabic- and Hebrew-language news outlets. They heard from students who have fought anti-BDS movements within their campus legislative bodies and participated in discussions about Mizrahi Jews, strengthening Jewish-black solidarity in the context of Israel delegitimization, using online tools and social media to advocate for Israel and creating events on campus and online.

According to Aviva Rosenschein, CAMERA's international campus director, despite COVID-19 and the "reality that most students will not experience what you may consider a 'normal' academic year, we hope that the conference will instill a sense of community for the students."

At this year's conference, Rosenschein told JNS of a special focus on one of the largest challenges students face - an increase in the concepts of identity politics, safe spaces and intersectionality which, at their best, "can empower students, especially minority groups, to express themselves and exhibit pride for who they are."

However, she maintained that at their worst, they have also led to the harassment and intimidation of Jewish and pro-Israel students because of their beliefs. "On many campuses, Zionist students are forced to make a choice: either denounce Israel or face ostracism."

It is therefore vital to teach students to send a critical message that bullying and demonization - from any community - will not be tolerated, said Rosenschein.

In one session at the online conference, director of the Institute for Black Solidarity with Israel Joshua Washington spoke at a session titled "Zionism and the Fight Against Anti-Black Racism: Are the Two Compatible?" It focused on intersectionality in the wake of the May 25 death of George Floyd at the hands of Minneapolis police, the resulting massive international protests related to the Black Lives Matter movement and the ensuing dialogue about BDS.

For decades, explained Washington, American Jews and the American black community have fought against discrimination and racism, which has continued as young Jews from across the country have pledged to support those in the black community in their struggle for equality. However, some activists and organizations, including the official BDS campaign, want to connect the fight against racism to the anti-Zionist cause, pushing many Jews into a corner.

As part of this dialogue, Washington told JNS, education is the key to strengthen solidarity. "Invite black students to campus events that tackle the controversial issues Jews are facing," he told the students. "Face them head on, and have the discussion and debates. IBSI also exists to assist with those conversations as well. This will build not only a strong allyship, but genuine friendships as well," he related.

Washington also suggested finding other ways of support outside of Black Lives Matter, pointing, for example, to the Woodson Center that helps blacks and faith-based organizations solve issues facing their communities.

CAMERA Fellow Sophie Sklar, a student at McGill University in Montreal, and incoming president of the Chabad on Campus chapter and the Religious Studies Undergraduate Society, told JNS that the fellowship has taught her how to be a strong ally for Israel who is supported and "well-informed and armed with facts, to be open to dialogue and discussion and to properly combat those on my campus who spread misinformation."

"On a campus such as mine," said the 20-year-old, "sometimes advocating for Israel and challenging the dominant narratives can be an isolating experience. However, this conference has shared resources, information and other means of support that has demonstrated to me that I am never truly alone in my fight."

Since McGill will be online this fall, she said "CAMERA has provided us with the resources to be able to continue our activism in an online format. From Zoom workshops to remote gatherings, this year will be a different one for Israel activists. Though the coronavirus has physically shut down my campus, I will still be writing as much as ever and fighting as much as ever for this cause I care so deeply about."

As a Mizrahi Jew, Sklar appreciated the discussions on communities that are often "overlooked and overshadowed."

"It was an amazing experience to see my identity and personal story reflected in one of the speakers and to see that my family's history is valued by CAMERA," she said. "It was also an incredibly positive experience for me to learn more about Mizrahi history, which will allow me to better speak up for myself when I return to campus."

'Focus on the facts'

Of the 100-plus students that took part in the conference, 62 were a part of the incoming CAMERA Fellow cohort that will be monitoring their campus media and anti-Israel events; attending further online trainings; publishing journalistic articles on relevant topics; and hosting events on their respective campuses once they go back in person. 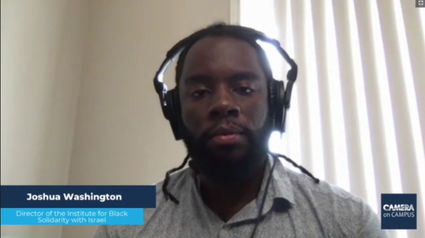 Institute for Black Solidarity with Israel Joshua Washington spoke at a session titled "Zionism and the Fight Against Anti-Black Racism: Are the Two Compatible?"

CAMERA Fellow Ben Stone, a 21-year-old student at Duke University and its business school, told JNS that he has "learned how to focus on the facts, and hone in on the inaccuracies propagated by SJP chapters and other supporters of BDS."

He also noted that he has become a better writer and more educated about the Israeli-Palestinian conflict.

During this period of time, he said, "I've seen a rampant increase of anti-Israel sentiments on social media, as well as a scapegoating of Jews by many people, including celebrities. I think that the distance that COVID has put between interpersonal interactions has given bigots a 'safe space' for their hate speech and lies."

However, he emphasized, "If CAMERA and other similar groups keep teaching us how to be proactive in a smart and educated way, then we will always come out on top. It isn't about being loud, but being right."