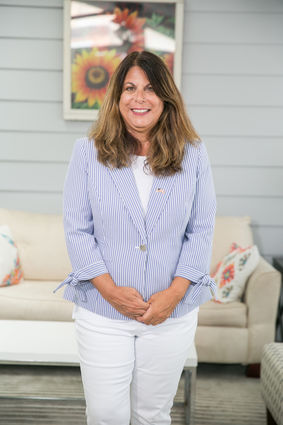 Two years ago, Tracey Kagan ran for office for the first time. Now she's running again - but this time, "it's a whole different ballgame," said Kagan. "I have learned so much in the past two years that it almost feels like a lifetime ago."

"I'm so proud to be part of this group," said Kagan, who is again running for State House Representative in District 29, which includes parts of Longwood, Altamonte Springs and Sanford. "Pat and Moira are exceptional leaders who share my commitment to making our community a welcoming, inclusive and equitable place for all. Seminole County has been a men's club for a very long time, and together we are finally going to break the glass ceiling this November."

Back in 2018, Kagan was moved to get involved following the shooting at Marjorie Stoneman Douglas High School. "I knew I had to do something," she said. After "jumping in with both feet," she lost her race by just 1,500 votes against longtime Republican incumbent Scott Plakon. "It was tough to work so hard and come so close, only to fall short of the finish line," Kagan admitted. "A campaign is a full-time job - and I already have a full-time job!" she said with a laugh. "Plus, my three girls are all in very busy stages of their lives, between high school, college and young adulthood."

But Kagan said that ultimately, her daughters - Stella, 15, Sofie, 20, and Emma, 24 - motivated her to pick herself up and run for office again. "I wanted to show them that even when the chips are down and things don't go your way, it's important to keep fighting for what you believe in," she said.

Kagan, a Democrat, is running on a platform that includes increased funding for public education, expanding Medicaid and protecting the environment. Of course, COVID-19 has dramatically changed the race since 2018 - both in terms of campaign strategy and voter priorities.

"In my conversations with voters in District 29, the number one issue is COVID," said Kagan. "They are worried about their health and safety and the health and safety of their loved ones. Many of them lack health insurance. And they feel let down by the current leadership. Florida never had a statewide mask mandate, which is proven to reduce the transmission of COVID. Plus, our current unemployment system was designed to fail by the lawmakers who voted for it - including Scott Plakon. The people I talk to are desperate for leaders who are listening and taking action."

As she did in 2018, Kagan cites the Jewish imperative of tikkun olam as a driving force behind her campaign. "I am obligated to help repair the world, as all Jews are," she said. She has also had to fend off antisemitic accusations from Plakon, who falsely claimed that her campaign was being bankrolled by Jewish philanthropist George Soros. (Plakon was also a member of a Facebook group in which antisemitic memes were shared.)

"At a time when hate crimes against Jews are at a record high in the United States, I am more resolved than ever to call out antisemitism whenever I see it," said Kagan, a lifelong supporter of Israel whose daughters all became bat mitzvahs at Congregation Ohev Shalom. "I am horrified by the rise in hate and division in this country. It will only end when we stand unified against it."

So far, Kagan has already shattered her previous fundraising records, raising more than $100,000 this cycle - primarily from individuals and small donors. "We are people-powered," she said, noting that her opponent's campaign is largely funded by corporations. "One voter sends me a small check every week in the mail with a lovely handwritten note. Those are the donations that fuel 'Team Tracey' and keep us going."

"I started this journey as a mom, and that's the reason I'm still here," she said. "I believe in building a brighter future for my daughters. But not just for them - I want all of our kids to have access to healthcare, education, clean air and clean water. And I want them to inherit a world free of hate. That's why I won't quit."